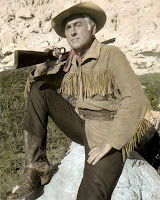 James Lablance Stewart was born on May 6, 1913 in Kensingron, London, England. He studied acting at the Webber-Douglas School of Dramatic Art resulting in finding work as an extra in British films and working with various stage companies before getting his first lead role in "So This Is London" in 1939. His career was interrupted during World War II as he served with the Black Watch regiment. He became an overnight star in England after his appearance in "The Man in Grey" (1943) attracting Hollywood's attention leading to a contract with MGM where he appeared in a number of swashbuckler and white hunter roles such as "King Solomon's Mines" (1950), "Scaramouche" (1952) and a color remake of "The Prisoner of Zenda” (1952) and "Beau Brummel" (1954).

He appeared as Old Surehand in three of Karl May’s Euro-westerns: “Frontier Hellcat” (1964), “Flaming Frontier” and “Rampage at Apache Wells” (both 1965)

Upon returning to the US in the 1970's, Hollywood was not interested in his services and he turned exclusively to TV movies and character acting for many major television shows. Finally a few of his television character acting appearances...Colonel Alan MacKenzie "The Men From Shiloh" and then revamped as "The Virginian." "Hotel" "The Wizard" and "Murder, She Wrote". Then in 1989, he made his Broadway debut opposite Rex Harrison and Glynis Jons in "The Circle," which won excellent reviews. He died at age 80 in Santa Monica, California a naturalized citizen of the United States from prostate cancer.

Today we remember Stewart Granger on what would have been his 100the birthday.