Who Are Those Guys? - Agustin Bescos 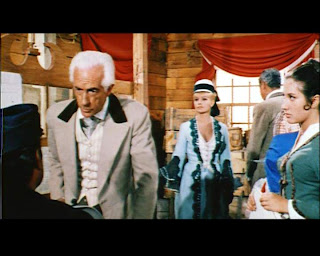 Agustín Bescos is a Spanish actor and another of the many credited and uncredited character and supporting actors we know little to nothing about. He can be seen in many films that are Italian/Spanish co-productions. His earliest credited film that I can find any record of is the Euro-western “Torrejón City” (1962) where he plays the barman. He was still appearing in films into the 1990s as his last credited film was “Infidelity” in 1995 where he plays the role of Señor Mayor. In most of his Euro-western roles he can be seen playing military officers, politicians, land owners and barmen. Although the Imdb has him credited in over 20 Euro-westerns many of these are mistakes. As in many cases any older actor with white hair appearing in a Euro-western was mistaken for Franco Pesce and Franco Gula. Several other actors’ credits are mixed in with these two Spaghetti western stalwarts. Actually I’ve been able to identify him in 8 Euro-westerns. After his apparent retirement his whereabouts have remained unknown.