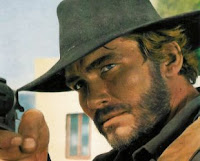 Ivan Djrassimovic was born on May 7, 1938 in Rome, Lazio, Italy. As Ivan Rassimov, he and his younger sister, Rada [1941- ], decided to pursue careers in acting. Ivan studied acting at the University at Trieste. After attending military service in Italy, he then settled in Rome to pursue his acting career. A series of small roles began his career, one of them being from the legendary director Mario Bava with “Planet of Vampires” (1965).

With his strong, piercing eyes and striking looks, Rassimov was often cast as villains, from Nazi soldiers, to tough guys, to murder suspects. Rassimov also occasionally played good guys and saw it as a novelty item from his villianous roles. From playing a police detective, an archeologist, and even a psychiatrist in Mario Bava's last theatrical movie, “Beyond the Door II” (1977). He was most often seen as a male stalwart of the Italian cannibal films in acting alongside Me Me Lai in three of them, most notably being “Jungle Holocaust” (1977).

By 1987, Rassimov more or less retired from acting and lived in a villa north of Rome with his wife and teenage daughter. He worked as the director of a publishing house for comic books and novels until his death on March 14, 2003.

Today we remember Ivan Rassimov on what would have been his 75th birthday.