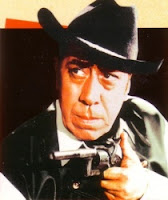 Fernand Joseph Désiré Contandin was born on May 8,1903 in Marseille, Bouches du Rhône, France Known to movie-goers worldwide as Fernandel he is one of the all-time giants of French cinema, Fernandel is still regarded with great affection in his native France.  His distinctive horse-like features and warm, larger-than-life persona made him a natural screen icon and an unbeatable comic performer.  In an acting career that spanned four decades and well over a hundred films, Fernandel had a significant impact on mainstream French cinema in the decade that preceded the Second World War and the decades that followed.

He had two brothers and a sister.  Both of his parents had a passion for the music hall and would often perform, in an amateur capacity, comedy and musical numbers at concerts, although his father was an accountant by profession.  On leaving school, the young Fernand was given a job in a bank, but soon managed to get himself fired.

Fernand began to forge a career as a performer, appearing in café-concerts as a comic singer.  To make ends meet, he found work by doing odd jobs around Marseilles, including short stints as a docker and employee in a texile house.  In 1925, aged 22, he married Henriette Manse, the sister of his best friend. They would have three children: Josette, Janine and Franck.  Fernand was so attentive to his wife that his mother-in-law referred to him in amusement as Fernand d’elle.  The term so appealed to the young comic that he decided to adopt it as his stage name, Fernandel.
Having completed his military service in 1926, Fernandel resumed his precarious career in comic theatre.   In 1928, he went to Paris and made his mark at the Bobino, in a performance that led him to win a series of contracts that rapidly established him as a music hall comic.  Watching one of Fernandel’s shows was Marc Allégret, a film director who, impressed by what he saw, offered him his first screen role, in Le Blanc et le Noir (1931).  The great French cineaste Jean Renoir then offered Fernandel a more substantial role in On purge bébé (1931).
Fernandel would go on to appear in over 150 films and TV appearances. Among which were two Euro-westerns: “Ernst the Rebel” (1938) and “Dynamite Jack” (1960).

Today we remember Fernandel on what would have been his 110th birthday.