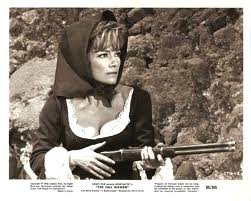 Anne Baxter was born in Michigan City, Indiana on May 7, 1923. Her father was a salesman and her mother Catherine was the daughter of architect Frank Lloyd Wright. She arrived in New York City at age 11, attending various private schools. Anne possessed acting talent and encouraged by her mother, Anne won a part at age 13 in a Broadway stage production. She then pursued her acting vocation by enrolling at Theodora Irvine School of the Theater. A trip to Hollywood in search of a role in the movies ended in failure. Returning to New York, she continued to act on Broadway and in summer stock shows. Another trip to California proved fruitful. A screen test resulted in a contract with Twentieth Century-Fox. At 17, she appeared in her first film, while on loan to MGM, "Twenty Mule Team" (1940), a minor Western featuring Wallace Beery. Her career lasted over forty years covering stage, films and television. Her best role was as 'Queen Nefertiri' in the blockbuster, “The Ten Commandments” (1956). Cast as 'Sophie MacDonald' in "The Razor's Edge" (1946), the role garnered her an Academy Award for Best Supporting Actress. Her portrayal of 'Eve Harrington' netted her a Oscar nomination in "All About Eve" (1950).

As her movie roles became fewer and fewer, she turned to television appearing as a guest star on numerous shows during the last 25 years of her life. She was a regular on the dramatic series, ‘Hotel’ (1983-1986). During a break in filming ‘Hotel’, while visiting New York City from her residence in Connecticut, attempting to hail a cab, she fell to the street after suffering a stroke and was taken to a New York hospital. Anne Baxter lingered for eight days dying at age 62 from a brain aneurysm.

Anne appeared in only one Euro-western “The Tall Women” (1966) playing the role of Mary Anne.

Today we remember Anne Baxter on what would have been her 90th birthday.