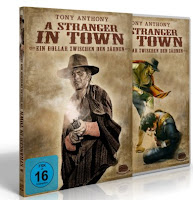 A stranger arrives in a sleepy border town, where he witnesses a Mexican army regiment massacred by bandits. The outlaws take the place of the soldiers in a lucrative deal with the American army. The stranger is hired by the bandits to ‘identify’ them as Federales, but when he’s done his job, the bandit leader tries to eliminate him. The stranger manages to escape but is then trapped and brutally tortured. Finally he faces the gang in a bloody showdown in the town’s street.

This film was my first exposure to a non-Leone Spaghetti western. I was not impressed. In fact it turned my off of the genre for 10-years. I had no idea who Tony Anthony was and figured it was an alias for some obscure Italian actor. I was used to and wanted to see the hero walk down the middle of the street and face who knows how many baddies on the opposite side because I knew he’d kick ass and come out the victor. Tony Anthony’s idea of a showdown was to hide and shoot someone in the back if need be. It was years later when I interviewed Tony that I learned and understood his idea. He wanted to portray the Stranger as a New York City street tough. A guy who used any advantage he could get to turn the tables on the other protagonist. Okay now it made sense he wasn’t playing James Bond out west he was playing Sharks and Jets. Too bad I found out 30 years to late.

The new release of A STRANGER IN TOWN is a magnificent production re-mastered from the original film. If you liked THE STRANGER RETURNS you’ll be just as impressed with this masterpiece. Released by Alive in PAL with Dolby 2.0 sound in English, German and Italian with 1.77, 16/9 aspect ratio you’ve never seen a cleaner more pristine cut of this now classic film. Extras include an audio commentary by the Stranger himself Tony Anthony and an interview with Lars Bloch who portrays the Cavalry Captain in the film.