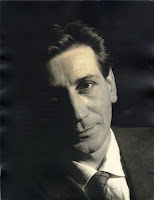 Alberto Bonucci was born in Campobasso, Italy on May 19, 1918. He was an Italian actor and voice actor, active in theater, radio and television.

After acting for various theater companies and on the radio until the early 1940s, he moved to Paris in 1949, performing with Vittorio Caprioli and Luciano Salce in th Rose Rouge cabaret, and building the foundations for the company that would give him fame and success .

In 1950 he was in the cast in the original Neapolitan Carousel, with the theatrical debut at the Teatro La Pergola in Florence. The same year he founded, together with Franca Valeri Caprioli, the famous Theatre Company of Gobbi, which launched a new style of comedy, made of satire, and which also gave rise to various radio broadcasts such The Nutcracker (1952), Women by James Thurber (1953), and Courteline all'italiana (1954).

Bonucci is best remember, for his participation in plays such as Intrighi d'amore (1951), Senza rete (1954) and films like “Luci del varietà” (1950) and “Carosello napoletano” (1954). In 1963 he also directed the episode "Il serpente", from the story by Mario Soldati, for the movie “L'amore difficile”. In 1959 he appeared in his only Euro-western “The Terror of Oklahoma” as Benny.

Praised for his natural virtues in comedy and dry humor, he played in numerous radio programs for RAI. He was also a narrator of the Nutcracker weekly radio series.

Alberto was the father of actress Nicoletta and actor Emilio Bonucci. He died in Rome from a brain tumor on April 5, 1969.

Today we remember Alberto Bonucci on what would have been his 95th birthday.