Who are Those Guys? - Luis Barbero 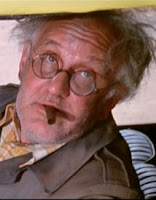 Luis Barbero was born on August 8, 1916 in Madrid, Spain. His father was the director of the Zarzuela Orchestra. Luis studied music and engineering in school but decided to become and actor debuting on stage in 1939 in the Ruperto Chapi [1851-1901] operetta "El rey que rabió". Barbero continues to appear in opera performances as a tenor and then turns to comic performances. Barbero did not make his film debut until 1957 but followed that with over 150 films and TV appearances. Luis became one of the most famous character actors in Spanish films while continuing to appear on stage. His most famous role was his last as Matías Poyo in the Spanish TV series "Médico de familia" (1995-1999). Barbero appeared in only two Euro-westerns as Juez in "A Fistful of Knuckles" (1965) starring Francho & Ciccio and as Mr. First in "Al este del Oeste" (1983). Luis Barbero died in Madrid on August 3, 2005.