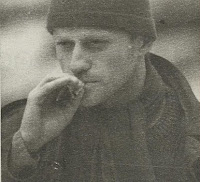 Edward Zentara committed suicide today May 25th, 2011 in his apartment in Tarnowie, Poland.

Edward Zentara was born on 18 March 1956 in Sianów (West Pomeranian). He was a theater actor, and film and television director. From July 4th 2008, he has been director of the Tarnów theater.

For the first time he performed at Theatre in Koszalin Proposition dialogue in a benefit production of "Actor" (1975).

At first he wanted to be a physical education teacher and then thought about becoming an actor after high school when he was preparing to attend the academy to study Economics. After graduating from the School of Economics in Koszalin in 1975, he studied at the Lodz Acting State College of Film, Television and Theatre. Leon Schiller, from which he graduated in 1980.

He has performed in theaters: the. Julius Osterwa in Lublin, Polish in Warsaw, the old. Helena Modjeska in Cracow. He worked with Stanislaw Ignacy Witkiewicz in Warsaw. Appearing in Krakow, Szczecin and the Polish Baltic Dramatic Theatre and he appeared in Koszalin, where he served as artistic director. His television debut occurred in 1978's series "Family" where he played the part of a servant.