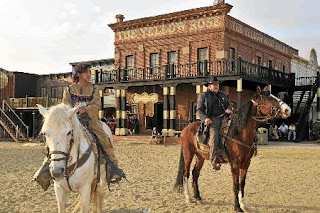 The director writes "A Dream" after having a prolific career as a specialist, horseman and actor• His grandson, Alejandro Sanchez, becomes the protagonist of the story filmed in Hollywood Mini

Powder is used to simulate a dusty road. The tricks in the world of film are amazing and achieve the desired effect for a particular situation as realistically as possible. Paco Barrilado, one of Spain’s best stuntmen, equestrian, and actors that are most often involved in Almeria film making, knows a thousand ways to infuse character in the making of his short film "A Dream".

The story begins as a tale told in the room of a house of a young boy’s departed grandfather. The grandfather and grandson are working together in a western film, and the child begins to close his eyes and takes a journey through the dream world of dreams.

The boy appears on a mountain transformed into an Indian and looking for a horse that has been stolen. Scanning the horizon and far away he glimpses a village. It ss the destination where the boy tries to fulfill his mission and find the person who had seized the horse from his family.

The film is shot in different areas of Mini Hollywood and the scenes in the film are sequences that are composed by director Paco Barillado. The plot will consist of a typical western and will be composed of about 70 people, 15 of whom are actors," said Barillado.

The protagonist of the story is the grandson of the director, Alejandro Sánchez López Barillado Jr., which shows positive values in his. "He is 9 years old and must possess good values in this world. Many children used to work in this profession. It is very hard. He has already participated in several films. He loves and supports the commitment of older people. Also important is the role of the other actors that foster and help provide values for children.

Barrilado is not only the director, but also the writer, producer and participated as an actor. The duration of the film is 30 minutes so it can enter competitions for short films."

Before shooting began in Mini Hollywood, the story began to be recorded in the headmaster's house the night before. Barrilado came to Mini Hollywood having gotten little sleep, but with an energy that overflowed onto the whole team.

The director is lucky to work with professional people: "I have a very good team. If it is a successful venture it is because of this group of people with whom we work. As the title of the film states this is a dream, small, but it is mine to make this short film."

Barrilado explains, as the cancan girls warm up, the reason for the shooting of a dream movie: "I'm seeing that now like everyone does, that I had a short life in the movies, I thought why not ?"

Barrilado has 60 years experience in the film world after having participated for the first time in seven years, but now it's his grandson’s turn. Entering the saloon and shaking the dust off from a long, hard journey was one of the sequences shot on the first day in Tabernas.

"A Dream" is a short film with a small staff, and requires detailed instructions to get every detail just right.

While some are watching videos, others waited their turn to go on stage with script in hand and others prepared for many other scenes that were going to be shot later.

Different directions were given by Paco Barrilardo, someone who had worked in many westerns. "Action must be said with force," the director noted with energy. Laughs were present on many occasions.

Sound, lighting and effects were among the technical part of the filming and specialists from different villages to convert the short into a real western. Sarsaparilla, a waiter, another guard all staged scenes. A conversation with a little Indian who guesses who might be behind the theft of the horse.

Between sequence and sequence, arriving in the makeup touch-ups, fill the glasses of the scenes were repeated until the best shot and frame level for the short film have an adequate quality to compete in competitions.

The planes that took to the same sequence varied in different recordings made. Saloon entrance from outside, inside and through the window.

After recording several sequences, Ballardo dressed, smeared his clothes with talcum powder and prepared to go on stage. "Slower, less reading, with more character, stand straighter, with more character, positions corrected ...", the director, interpretation and even the smoke coming from the side. No detail escaped him at Almeria, demonstrating once again his years of knowledge.
For several days they filmed in Mini Hollywood and Tabernas, to recover the essence of westerns filmed in Almería during the sixties and which turned the province into one of the favorite destinations for international film making.

Story: A young boy dreams about life in the Old West.