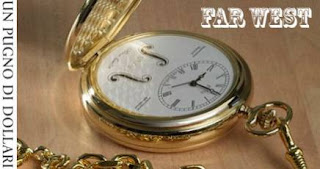 Are you a fan of Western movies of the 60s? The watchmaker Boegli has a new pocket watch for you. A new model, named the Far West , which is inspired by the musical pocket watch that Clint Eastwood is holding in the unforgettable film by Sergio Leone "For a Few Dollars More" 1965.

When the lid is lifted it activates a musical mechanism that plays the melody of the final duel, composed by Ennio Morricone.

The design evokes the charming and dusty atmosphere of the old west, with the characteristic motifs of the guitars on the western quadrant.

Fully polished gold plated to 10 microns, Far West is a limited edition of only 99 numbered copies. A must for any fan of the Spaghetti Western!.

Every Italian must have seen at least once in a lifetime a spaghetti western movie signed by the master of the genre Sergio Leone and especially the Dollars Trilogy. That's why if you look back to the last scenes of For a Few Dollars More (1965), each scene, will seem familiar. Even more recognizable, thanks to the genius of Ennio Morricone, will always be the thin and clear sound of the pocket watch that Clint Eastwood is holding, before the final showdown, scanding the sixty endless seconds.

Boegli has decided to reproduce this cinema's cult object: every time you lift the lid, the mechanism will play those same musical notes, which will take you back in the dusty old west. Obviously the watch is available in a limited edition of 99 numbered specimens in shiny gold (on sale for 1'560 euros). Every self-respecting fan of this kind of cinema should have one.
Posted by Tom B. at 7:42 AM