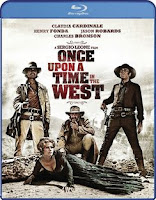 The new Blu Ray release of "Once Upon a Time in the West" is presented in 1080p high definition with an aspect ratio of 2.35:1.
Audio is presented in a 5.1 DTS-HD Master Audio track that expands the film’s mix subtly and effectively. Dialogue is perfectly clean, effects are credibly dynamic and Morricone’s score features great clarity. The original mono mix is also included.

The disc features both the theatrical cut and the minute-longer restored version, seamlessly branched here.

Special Features
All the extras from the special edition DVD are ported over here, and everything, save for the theatrical trailer, remains in standard def. An audio commentary with a long list of participants — historians Christopher Frayling and Sheldon Hall; directors and fans John Carpenter, John Milius and Alex Cox; Cardinale; and writer Bernard Bertolucci — is included, along with three lengthy featurettes about the making of the film. A short piece on the history of railroads in America, a look at the locations then and now, and a gallery of production photos round out the disc.