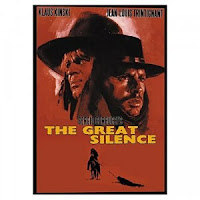 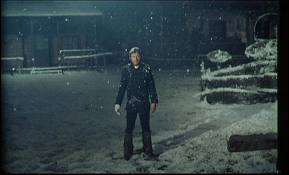 In the winter of 1898, the rough weather brings hunger and privation to the small village of Snow Hill, Utah. In order to survive, the poor people start to steal and rob. Therefore they become outlaws and have to hide in the mountains, because they now have bounties on them. While people are suffering, the village becomes a paradise for bounty hunters, who cannot be opposed by now wanted outlawed villagers.

When Pauline's husband falls prey to the unscrupulous bounty hunter Loco, she hires a mute gunfighter named Silence, to kill Loco and avenge her husband’s murder. Since Silence as a child had to watch his parents being killed by bounty hunters, he tramps through the country chasing those who are killing people for money under the cloak of the law. In order not to violate the law and be added to the blacklist of the bounty hunters, he provokes them to pull out their weapon first and shoots them in self-defense. But Loco is too smart to fall for this trap and does not allow himself to be provoked. Sheriff Gideon Burnett has been given the impossible task by Governor of Utah to re-establish law and order in the region and to grant amnesty to those starving in the mountains. He is eliminated by Loco and now must face Silence in a final showdown. [Two endings were filmed and are available: (1) Silence is shot and killed. (2) Sheriff Burnett rides into Snow Hill just in time to save Silence and together they dispose of Loco and his gang].

YouTube link: http://www.youtube.com/watch?v=RAJI-UQ4Tak
Posted by Tom B. at 7:00 AM