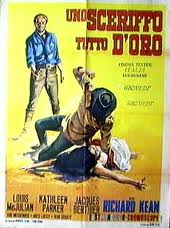 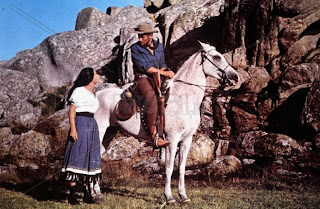 Arizona Roy, an outlaw, is about to be lynched is rescued by Jeff Randall, a U.S. Marshal, who takes with him prisoner in order to testify at an important trial. Roy, suspicious by nature, asks Jeff for an explanation and the lawman tells him he is needed as an accomplice to rob a gold shipment. Roy must comply as he is threatened with a gun, forcing him to the stop a stagecoach with travelers to rob them and force the driver to hand over the boxes containing half a million dollars in gold. At the inn where they hideout after the robbery the corrupt Marshal hides the gold, where it is discovered by Jane, the owner of the tavern. A bandit named Vargas seizes the gold and Roy, Randall and Jane must unite to recover the half a million dollars and escape the gang of Vargas. The Sheriff cannot live with his life of crime and has a change of heart. He tracks Roy to his hideout and confronts Vargas who kills him but confesses that Arizona Roy is not guilty of his accused crimes.
Posted by Tom B. at 6:41 AM