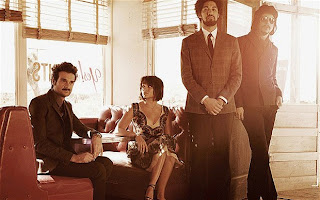 Ten years ago American musician Brian Burton was pulling pints in a pub in London’s grimy New Cross. But in the last decade, under the name Danger Mouse, he has become one of the world’s most sought-after producers and collaborators. Burton is known for being a speedy worker, but his new album, Rome, took five years of painstaking effort to complete. Recorded in the Eternal City as a self-financed labour of love, its widescreen orchestral luxuriance and romantic vocals make it one of the most innovative and accomplished pop albums of the year so far.

In the same way that Buena Vista Social Club used musicians from the glory days of Cuban music, Rome reunites musicians who appeared on the much-loved soundtracks of the Spaghetti Westerns of the Sixties and Seventies. But where the spirit of Buena Vista was pure nostalgia, the use here of freshly written songs and contemporary singers such as Jack White and Norah Jones makes for an album based around retro elements that sounds thrillingly new.

Now 33, Burton has had a phenomenal few years, producing top artists such as Gorillaz, Beck and U2, and having a worldwide number one in 2006 with the song Crazy as half of Gnarls Barkley with Cee Lo Green. 2004’s The Grey Album, his brilliant mash-up of the Beatles’ "White Album" and Jay-Z’s The Black Album, became an internet sensation and was called "the ultimate remix album" by Rolling Stone magazine. In February this year, he was named Producer of the Year at the Grammy Awards.

It was as a film student at the University of Georgia that Burton first heard the Italian composers who inspired the Rome album, particularly Ennio Morricone’s scores for Sergio Leone films such as The Good, the Bad and the Ugly and Once Upon a Time in America. "That music jumped out immediately and I found it so inspiring – the mix of funk, jazz and classical music," he tells me when we meet in London with his Italian collaborator, Daniele Luppi. "The first music I ever made on my own in my dorm-room was fake Italian movie soundtracks."

In the Eighties television cartoon Danger Mouse, from which Burton takes his nickname, the rodent’s long-suffering accomplice is called Penfold. On Rome, the Penfold role falls to Luppi. "Growing up, I was immersed in Italian film music, especially the crime and sexy films of the Seventies," says Luppi. "When I left Italy to live in the States, I moved away from it, but began to realise that this belonged to me. It was my musical culture." In 2004, Luppi made a loving homage album An Italian Story. When he heard it, Burton was beguiled, mistaking it for a compilation of original film sountrack music, rather than a 21st-century re-creation.

Soon after, mutual friends brought Burton and Luppi together and they began to cook up a scheme to work with the musicians that had performed on the films of the Italian golden age. Their plan, says Burton, "got more and more specific. We wanted to work at the same studio, with the same musicians and even the same microphones."

The duo began to record for the album in Rome in October 2006, booking Forum Studios (formerly the Ortophonic Studios) founded by, among others, Ennio Morricone. It is, as Burton puts it, "a vast space underneath a church, filled with old mixing desks".

They also tracked down vintage instruments. "One of the biggest collectors was a Vespa engineer," says Luppi. "We went to his garage and he showed us his collection of guitars from the Sixties. He didn’t want payment for us to use them, so we bought him a crate of wine."

More difficult was reuniting the musicians, many now in their seventies and eighties. They included studio backing band Marc 4, and I Cantori Moderni, a choir led by Alessandro Alessandroni, who whistles on many of the original Spaghetti Western soundtracks.

"None of them knew who we were, but it was an emotional moment when they assembled for the first time in decades. There were tears and hugs," says Luppi. "Although within an hour or two they were shouting and abusing each other – also just like the old times, apparently."

By 2009, Burton and Luppi had a collection of sweepingly romantic and melancholy tracks, with gorgeous choirs and orchestral backing. But they had always envisaged the album as half instrumental and half sung, and began thinking of singers to complement the music.

Burton invited Jack White of the White Stripes to sing the male part. "I’d been touring with my [other] band The Raconteurs and we were more or less on the same circuit as Gnarls Barkley," says White, when I catch up with him at the record shop he has recently opened in Nashville. "Brian played me this lush, beautiful soundtrack.

Months later he asked if I could sing something on it. I had all 12 pieces and would drive around Nashville singing melodies into a hand-held recorder with the music on it, seeing which ones worked and coming up with lyrics."

From this process, some darkly romantic songs emerged, such as Two Against One ("I’m already fighting me, so what’s another one") and The Rose With a Broken Neck. "What was new for me," says White, "is that usually I’m playing an instrument when I sing, so I had more freedom, and this opened up a new door. I did various versions and let Brian mix them, which was a relief because I usually have to do that." White is putting out a vinyl version of the record on his boutique label, Third Man. "It sounds insanely good on vinyl," he says. He believes Burton should be the man to do the soundtrack for the next James Bond movie.

With White’s tortured, soulful vocals recorded, the only thing remaining was to find a female singer. "We thought we needed an everywoman type, and I thought of Norah Jones, as she has such a beautiful voice," says Burton.

"I snuck in at the end of the project," Jones says from New York, to where she has recently returned following a world tour. "It was such a cool collection of people, and the music was so romantic."

Despite the Roman theme, the singers recorded their parts in Los Angeles. Jones describes Burton as "obsessive, but in a good way. Meticulous might be a better way of putting it – he has such clear, precise ideas of aesthetics and style." The attention to detail pays off, she says. "It’s like when you walk into a house, you can tell if they have made it with good materials. The album is built to last – it’s timeless."

A powerfully melancholic song, Black, features Jones’s sultry vocals and is slated as a single. Like Jack White, she hopes they will be able to perform the album live. "The big headache will be deciding what to wear," she says. On the day I meet them, Luppi and Burton are, appropriately enough, wearing sharp Italian-style suits. I tell them that Rome already sounds like an album that will be listened to many years from now. "It’s a very visual album – the soundtrack to a tragic love story," says Burton. "In everything I’ve done I’ve tried to do something unique – I think we’ve succeeded."


YouTube link: http://www.youtube.com/watch?v=BHDrWfndze0
Posted by Tom B. at 6:03 AM