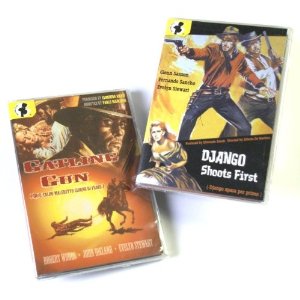 Two of Dorado Films' earlier releases -- Django Shoots First and Gatling Gun -- are now available to buy together as a budget-priced double pack.

Django (Glenn Saxson) arrives in the town of Silver Creek and links up with a local eccentric, Gordon (Fernando Sancho). Gordon, who literally loves the smell of money, informs him that his late father owned half of the town and the pair decide to prise Django's rightful inheritance out of his father's crooked business partner, Kluster (Nando Gazzolo). A series of violent confrontations and double-crosses duly follows and matters are further complicated by the actions of Kluster's duplicitous wife (Evelyn Stewart) and the sudden arrival of a mysterious stranger called Doc (Alfredo Lupo).

This show is noteworthy because it features Fernando Sancho in a rare outing as a gringo good guy. Sancho turns in a great performance, expertly providing just the right amount of mild comic relief in a couple of spots. In many ways Gordon is like a gringo antecedent of the supporting Mexican characters that Ignazio Spalla (AKA Pedro Sanchez) played in each of Gianfranco Parolini's three Sabata films. Glenn Saxson displays a great deal of confidence here, and he brings a kind of Giuliano Gemma-like sense of fun to his role, but he doesn't exude enough charisma to make a particularly big impression as a genre anti-hero. That said, his Django character is likeable enough. Interestingly, this show possesses something of a film noir-ish vibe: Kluster's wife is a dangerous femme fatale whose unpredictable behaviour and vicious nature potentially spell big trouble for anyone who gets in her way and Doc -- who dresses like Sartana and makes use of a gadget-rigged cane -- is a hard-boiled loner with a secret past. Bruno Nicolai turns in a rousing soundtrack score which compliments some generally very good -- and at times quite outstanding -- cinematography. Django Shoots First swings towards the more populist end of the genre but there's nothing wrong with that: there may be some slightly ill-fitting comedy aspects present here but the film remains engaging and entertaining in a rip-roaring kind of way. The picture and sound quality here are both near enough excellent.

Dr. Richard Gatling (Ennio Balbo) arranges to hold a private demonstration of his new rapid-fire weapon for a trio of Union representatives. However, assassins soon eliminate the Union representatives and Gatling and his gun are kidnapped by Tarpas (John Ireland), a Mexican bandit who is working in conjunction with a shadowy, unseen partner. Circumstantial evidence leads the Union's top brass to suspect that one of their own secret service operatives must be guilty of passing details about Gatling's top-secret work to the South: agent Chris Tanner (Robert Woods) is duly court-martialed and imprisoned pending execution. Convinced of his innocence, Tanner's superior secretly gives the beleaguered agent a chance to prove his loyalty to the Union by finding out what has happened to Gatling and his gun and Tanner duly embarks on an undercover mission that is fraught with danger and intrigue.

At a basic narrative level, Gatling Gun has quite a bit in common with the fanciful Spaghetti Westerns directed by Gianfranco Parolini. Granted, Tanner is a public servant who is working for the good of the Union and instead of the fortunes in stolen gold or banknotes that generally interest Parolini's avaricious anti-heroes, the focus of Tanner's mission is a super weapon and the man who invented it. But with two different ransom deals on the table that each amount to one million dollars, you can be sure that the kind of outrageous intrigues, murderous misunderstandings, false trails and deadly double-crosses that litter the Sartana and Sabata films are also much in evidence here. Gatling Gun's content also betrays the influence of the James Bond films but while the show's spy/espionage aspects work well enough they result in a plot that is so intricate and convoluted that a good amount of the show's running time is necessarily taken up by talky exposition and quite detailed scene setting sequences. The film's cast -- which represents a virtual "who's who" of genre stalwarts -- all turn in suitably lively performances. The quality of the show's cinematography fluctuates somewhat (quite stylish one moment but rushed-looking the next) but Piero Piccioni provides an enjoyably groovy soundtrack score that possesses a slightly jazzy and sub-psychedelic vibe. Interest in this show is high since Quentin Tarantino ranked the film at number twenty in a list of his favourite Spaghetti Westerns. Gatling Gun wouldn't feature in my own top twenty list but it remains an interesting and entertaining enough take on the genre. Picture quality here is excellent while the sound quality is just short of very good.