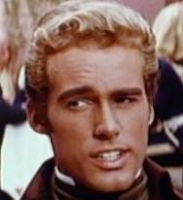 Sean Leslie Flynn was born on May 31, 1941 in Los Angeles, California. The son of Errol Flynn [1909-1959] and actress Lili Damita [1904-1994]. He was involved in a custody battle between his parents and was raised primarily by his mother in Palm Beach, Florida. He attended Palm Beach Private School and Lawrenceville prep school. He spent summers with his father in Jamaica or his father’s yacht. Sean attended Duke University but left school to become an actor like his famous parents. His first appearance was on his father’s television series "The Errol Flynn Theater" in 1957. He then appeared in "Where the Boys Are" (1960) then moved to Italy during the height of the Sword and Sandal genre craze. He appeared in "The Son of Captain Blood" (1962) and then made his first Euro-western "Duel at the Rio Grande" (1963). He made two more Euro-westerns "7 Magnificent Guns" and "A Woman for Ringo" both in 1966. He became bored with film making and moved to Kenya, Africa where he became a game warden and hunter. Sean then became a photo journalist for the French magazine Paris-Match and then Time-Life and finally for United Press International. He arrived in South Vietnam in January 1966 to cover the Vietnam war. In March he was wounded in his right knee and returned to Europe long enough to make his last film "Cinq gars pour Singapour" (1967). He then returned to photo journalism and covered the Arab-Israeli War in 1967. Returning to Vietnam in 1968 he became a freelance photographer and was working on a documentary of the war. He disappeared with colleague Dana Stone on April 6, 1970, presumed captured by Khmer Rouge guerillas. They may have been held in captivity for another year and executed in June 1971, but that is uncertain. What is known is they were executed by their captors. Remains were found in a mass grave in March, 2010 proved not to be the bodies of Flynn and Stone. Today we celebrate what would have been Sean Flynn’s 70th birthday.