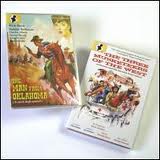 The Man From Oklahoma and

The Three Musketeers of the West

-- are now available to buy together as a budget-priced double pack.
The Man From Oklahoma Directed by Jesus Balcazar. 1965. 84 min. Widescreen (2.35:1 anamorphic).

When the local sheriff is brutally murdered by Jim Edwards (George Herzig) and Hondo (Karl-Otto Alberty), 'Oklahoma' Dan (Rick Horn) is sent to replace him. He finds a town that is still in shock following the murder of Georgina White's (Sabine Bethmann) land-owning father. A local businessman, Watson (Tom Felleghy), is spreading rumours that Jim's volatile father, Roy (Pepe Calvo), must be the killer because he had expressed an interest in White's land. Then again, Watson seems to be taking an unhealthy interest in Georgina's inheritance too. Dan must solve the murder before Georgina sells the land to the wrong man but when Jim Edwards goes rogue, the sheriff faces the prospect of taking on Roy Edwards' gang of tough guys alone.

One of the Balcazar family's early Spanish Westerns, this is a quite enjoyable little film. Low budget but finely assembled, this is a good-looking and reasonably involving show. These 'intrigue provoked by land-grabbing'-themed genre entries aren't to everybody's liking but there's plenty of well-staged action on display here (some of it quite brutal in its execution) and the film's characters are pretty well defined. The film also sports a really neat twist ending. Rick Horn's sheriff is a slightly goofy and lunky character who adds a sense of fun to the show while genre stalwart Pepe Calvo turns in a welcome performance as Roy Edwards. Given this film's rarity, the picture quality here is pretty good while the disc's sound quality is very good.

Anarchic in approach, irreverent in tone and chockfull of farcical situations and slapstick set pieces, The Three Musketeers of the West is remembered as being one of the craziest Spaghetti Westerns ever made. An over the top comedy vehicle from start to finish, the film features daftness aplenty and positively revels in its own skewed sense of the bizarre. However, the show isn't short of charm and it does possess a number of quite endearing features. An all star cast of fan favourites delivering enthusiastic performances, a brisk sense of pace, some giddily choreographed fight scenes and some genuinely funny moments all help to add a distinctive edge to this eccentric but fun show. Genre stalwart Carlo Rustichelli's soundtrack score features a number of pleasant and easy-going cues that are mostly comedic in nature. Picture quality here is very good, as is the disc's sound quality.

Extras: trailers, an alternate scene and a production notes insert.