'In Germany they call all my movies Django': Franco Nero tells how everywhere he goes, even today, people shout Django, the name of the 1966 film he credits with giving him a great career 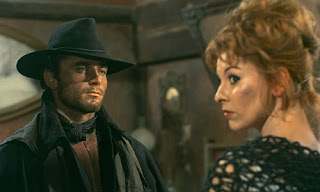 Everyone has a first love and mine was the western. When I was a child and dreamed of the movies, it was always as a cowboy on a white hores. Every actor wants to make a western. But when I was offfered "Django", I didn't want to do it. It was movies. I studied at the Piccolo Teatro di Milano: I was a theatre actor. I had done a few films - I was actually discovered by John Huston, who made me Abel in his movie of "the Bible".

But I agreed. Django was a fast shoot. We started in December 1965; it was out by March 1966. There was no real script: in the Christmas break Bruno Corbucci, brother of the director Sergio, wrote a scaletta, like a synopsis but more detailed, still not a full screenplay. This was not an unusual situation: I remember going to the Caribbean to shoot a film called "The Shark Hunter" for Enzo G. Castellari and all the copies of the script vanished when the Italian actor who was supposed to translate it lost his luggage. But for the Italians that was not a problem, there was no fear. We just shot it day by day, and little by little we made the movie.

But when we shot Django, it was very cold and raining. I remember Sergio Corbucci saying one time "We have to shoot the titles now." I had to walk and walk carrying a coffin through the mud. Sergio told me: "I will tell you when to stop." I kept on and on, waiting for him to call. When I finally stopped and looked back, everyone had gone. That was his idea of humour, very black. We'd arrive on set and he'd say, "How many shall we kill today, Franco? 20? 30? I think 30."

I had no idea it would turn out to be so special. It wasn't just a success; it was a phenomenon. Everywhere I go people shout Django at me. Even today, as I am working in Brazil, kids call me Django. In Japan, they won't even put my name on movie posters, they put Django. In Germany, they call all my movies Django; I did a great movie about the Sicilian mafia and they called it "Django in the Mafia". "The Shark Hunter" they called "Django Django". They say: "Well, it's your problem."

But it's not really a problem for me. Django gave me a great career. I have done movies with all the top European directors: Bunuel, Fassbinder, Bondarchuk. I did Hollywood movies such as "Camelot" and "Die Hard 2". I've done comedies, dramas, thrillers, everything. One movie I'm particulary proud of is "A Quiet Place in the Country". It was made by Elio Petri who for me was an Italian Kubrick. He only made about 10 films but they were all completely different, and so ahead of their time. For Petri I played and artist, so they put me with a young painter, who did the paintings in the films. After shooting, he asked me if I wanted to buy any of them, for $10,000. In the 1960s that sounded ridiculous, he was a nobody. I think I told him to fuck off. Years later, I was in New York and saw his paintings on huge billboards. His name was Jim Dine, and you can't get a painting of his for less than $100,000.

I can only guess as to why Django was so big. The world is made up of workers and workers would love to be Django. They would like to go to the boss and say: "Listen, from now on things are going to be different." Django is that man. Now Tarantino is making "Django Unchained". Everybody is telling me I am in the movie but I've not been asked by Tarantino officially. Not yet. There were many, many other Django films following mine, with other actors and directors, but there is only on Django.

Nero introduces "A Quiet Place in the Country" tonight at the Italian Cultural Institute and "Django" tomorrow at the Odeon, Covent Garden, London, as part of the Cine-Excess Festival. For details go to
cine-excess.co.uk
Posted by Tom B. at 7:26 AM