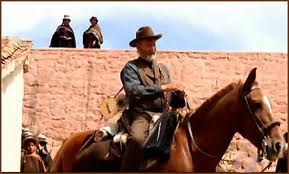 James Blackthorn is an old Gringo living quietly in the green tropical valleys of Bolivia. He breeds horses and has a romantic friendship with a native woman. He's getting on in years and wants to die at home, in the United States. His real name is Butch Cassidy, one of the last and most famous outlaws from the far West. But the legend of his life has almost faded into oblivion as everyone believes him long dead.

As he crosses the high plateau on his way home, James encounters another rider, far younger and inexperienced. A Spanish mine engineer by the name of Ernesto Apodaca who is fleeing after having robbed a mine. Remembering his past and in need of money, Blackthorn decides to accompany the young man on his frantic flight across Bolivia. During this time the two men, although very different, will become friends amongst the violence and the loneliness of the Bolivian desert. But Blackthorn is not the only one with a secret... In no man's land and hounded by more and more armed men, both men will have no choice but to reveal their true intentions and face reality, once and for all.

Sam Shepard delivers a beautifully understated performance in the Tribeca Film Festival-screened western which imagines the bank robber quietly living as a rancher.

That classic freeze-frame at the end of Butch Cassidy and the Sundance Kid notwithstanding, the famous outlaw apparently did not die in a shootout with the Bolivian army in 1908. That, at least, is the conceit of Blackthorn, which imagines a now aged Butch quietly living as a rancher twenty years later. Sam Shepard stars as the iconic character in this elegiac western that is less a sequel to George Roy Hill’s film than a meditation on age and a lost way of life.

The film, directed by Spanish screenwriter/director Mateo Gil (Open Your Eyes, The Sea Inside), recently received its world premiere at the Tribeca Film Festival. Set in the late 1920s, the film presents Butch living under the assumed name of James Blackthorn and enjoying the occasional dalliance with a local woman (Magaly Solier). But the peacefulness of his twilight years is marred by a desire to return to the U.S. and be reunited with his son. He withdraws all of his money from the local bank, ironically remarking that he’s rarely received courteous treatment in such an institution. Through convoluted circumstances, he winds up losing the money and pairing off with a Spanish thief, Eduardo (Eduardo Noriega), in a scheme to rob the local mine. But things don’t turn out quite as planned, with Eduardo turning out to be a less than reliable partner and Butch finding himself in the familiar position of being hotly pursued. The story itself is uncompelling with the exception of a few scenes, most notably Butch’s ironic reunion with a lawman (wonderfully played by Stephen Rea) who has been pursuing him for decades. There are also occasional flashbacks to Butch’s younger days, including his fateful final adventure with the Sundance Kid. But Blackthorn is less interested in narrative, or even action, than in displaying gorgeous vistas of the vast Bolivian countryside and showcasing Shepard’s grizzled, laconic presence. The actor delivers a beautifully understated, world-weary turn that largely makes up for the slow-paced film’s longueurs, and which in a better film could be described as iconic. Screenwriter: Miguel Barros.Producers: Ibon Cormenzana, Andres Santana.Director of photography: J.A. Ruiz Anchia.Editor: David Gallart.Production designer: Juan Pedro De Gaspar.Music: Lucio Godoy.Costume designer: No rating, 98 min.