The English actor Douglas Booth possesses a deceptively eclectic résumé with projects involving zombies, aliens, and Miley Cyrus. From playing classic literature figures like Romeo and Great Expectations‘ Pip to embodying artists as diverse as the poet Percy Shelley (in the melancholic biopic Mary Shelley) and the Mötley Crüe bassist Nikki Sixx (in the raucous Netflix tell-all The Dirt), Booth seamlessly works in a wide variety of genres as wildly different characters.

The 2022 AMC+ series That Dirty Black Bag continues that trend, with Booth jumping headfirst into the spaghetti Western genre playing a remorseless killer seeking revenge for a past injustice. To celebrate the release of the first season on DVD and Blu-ray, Booth talked to Digital Trends about why he was drawn to the project, what his favorite Westerns are, and how fun and hard it was working with friend and co-star Dominic Cooper.

Note: This interview has been edited for length and clarity.

Digital Trends: How did you become involved in the show?

Douglas Booth: The scripts were sent to me and I thought they were really engaging. Each character was dark and none of them were fulfilled. There were no heroes. I couldn’t tell who was good, who was bad, and who was morally corrupted. And I found that very interesting. 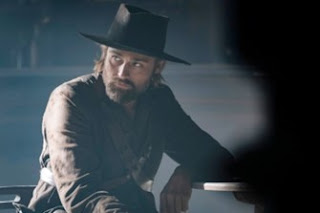 Dominic Cooper is a good friend of mine, and he was already attached. I thought that it looked like fun. We got to shoot in Italy and the Sahara Desert. I was locked in my house because of the COVID lockdown and there was this opportunity to go on this wild adventure and saddle up. And I thought, yes, please.

Were you a fan of the spaghetti Western genre before taking this on?

I wouldn’t say I was like a mad spaghetti Western fan, but I have always loved Westerns since I was a kid. I don’t know why. I think they used to just play on repeat on TV. It just looked like fun being on the open road and riding on horseback. I had seen The Good, the Bad, and the Ugly and a couple of the Dollars movies, so I was a fan. I very much enjoyed them.

I would say The Good, the Bad, and the Ugly and Django Unchained.

Your character, Red Bill, is very complex. He’s a killer, but by the end of the series, without spoiling anything, we really understand what motivates him. Viewers sympathize with him. How did you approach playing a character like that?

I think you start by figuring out where he’s come from. What was he like before all this trauma happened to him? Then you try and figure out what has pushed him and driven him to the place that he now finds himself in. For me, it was focusing on the love he had for his mother and how he dealt with his grief and tragic circumstances. He clearly hasn’t dealt with it in a healthy way because he chops people’s heads up and puts them in bags. [Laughs]

I kind of started from a point of a young boy losing his mother and thinking about my dad and my mother. I’m extremely close to my mom. And I remember as a kid, I used to have recurring nightmares about losing her, which was horrible, but that was a place that was the first place that I could connect with Red Bill. One of my favorite parts in the series is when he plays the piano in a scene late in the season. You can see that there is a softness there that is from a previous life.

You mentioned Dominic Cooper earlier. Both your characters are sort of natural enemies, but you have to team up to get what they want. What was it like working with him?

A lot of fun. We were in lockdown at home, so to suddenly be at a hotel in Italy with one of your friends was great. We had long dinners, drank copious amounts of wine, and just had lots of time to really figure out what we want to do with the characters. 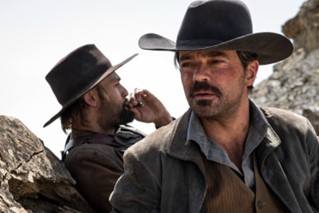 Of course, when you work with a very close friend of yours, it’s testing at times. And when you are working for six months, we got tired by the end and were pretty broken. Our feet were hurt from being in cowboy boots on a rocky hillside. At one point, Dominic busted his knee. We were falling apart by the end, but we ultimately had a lot of fun.

The season finale opened a lot of doors but left a lot of questions unanswered. What do you want to see happen in the second season?

I’d like to see Red Bill find peace. He spent a lot of this season trying to get information. He’s trying to get answers to things about his past. There’s only one way that’s going to happen: violence. There are some twisted people in the show, and I think he may be able to sort a couple of people out while he’s trying to fulfill his vendetta.