Who Are Those Composers? ~ George Oddner 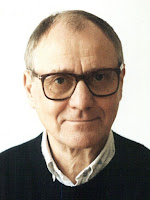 Georg Mirskij Oddner was born in Stockholm Sweden on October 17, 1923. Oddner's mother was a Russian named Julia Karabonowa. His father, Carl E Ohlsson, was a teacher

Early in his life Oddner was devoted to music, at the expense of, among other things, his studies. He never graduated from school but instead became a jazz drummer in Putte Wickman’s sextet. He also worked at an insurance company and took evening courses at Konstfack.

In 1950 he decided to leave Sweden, sold all his belongings and bought a ticket to the United States and invested the rest of his money in photography. With an introductory letter from Sten Didrik Bellander, he managed to get a job as an assistant to New York photographer Richard Avedon. Oddner was already familiar and his works and was greatly influenced by his photographic art several years before.

He then returned to Sweden in 1952 and settled in Malmö where he opened a photo studio. His main area of work was in advertising, fashion and reporting. He became the first photographer to have an exhibit at the Malmö Art Museum from 1957-1958. His work is represented in the National Museum in Stockholm.

In the 1970s he turned his attention to film where he became a screenwriter, composer and actor. He was co-composer for the Euro-western “The New Land” (1972), a sequel to 1971 film “The Emigrants”, along with Bengt Ernryd, Lars August Lundh and Nils Parling.