Why Sergio Leone's Spaghetti Westerns came to define the genre, and how today's audiences need to revisit the iconic Clint Eastwood films. 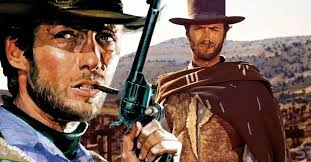 Italian auteur Sergio Leone's iconic trio of Spaghetti Westerns\ with Clint Eastwood — unofficially dubbed "the Dollars trilogy" — have become an essential piece of the Western film landscape. Although they were not released as a trilogy, the films are connected to each other, and there's a best order to watch them in. Comprised of 1964's “A Fistful of Dollars, 1965's For a Few Dollars More, and 1966's “The Good, the Bad and Ugly”, the Dollars trilogy helped change filmmakers' approach and the aesthetic style of the entire Western genre. Leone's influence continues today, as seen with titles such as “The Hateful Eight” and ‘The Mandalorian’.

Sergio Leone's Dollars trilogy founded the Spaghetti Western genre, largely because of Leone's masterful direction. The scope often felt larger than life, the music, courtesy of iconic movie score composer Ennio Morricone, was instantly iconic, and the stories, while perhaps not as singularly spectacular as something like John Ford's “The Searchers” or “Stagecoach” were episodic and grand. According to the filmmaker, his films were not meant to spark a cinematic revolution; even so, they inspired 200 additional Spaghetti Westerns, and half of them contained the word "dollars" in the title.

Leone's professional relationship with Clint Eastwood came to be after the director spotted the up-and-coming actor in the television series ‘Rawhide’. After being offered the lead role in “A Fistful of Dollars”, his first in film, Eastwood took the low-paying gig out of interest in visiting Europe. Through production, a hazardous process which included a fairly large language barrier, they concluded their unofficial remake of Akira Kurosawa's samurai thriller “Yojimbo”, and Eastwood returned to ‘Rawhide’ totally ignorant to the monstrous success “Fistful’ had become overseas. Overnight, Eastwood had turned into an international star, and "Spaghetti Western" had become a household term. Following “A Fistful of Dollars”, Eastwood and Leone would go on to collaborate on two additional films together, each using the experience to evolve as filmmakers.

What the Dollars Trilogy Is 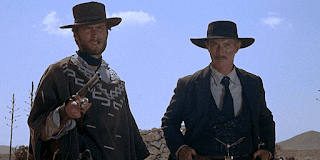 The Dollars Trilogy is the unofficial, overarching name assigned to Leone's trio of films. While A Fistful of Dollars, one of the best Westerns of all time, was an instant smash hit overseas, American audiences had largely grown tired of the Western genre. Though there was the occasional standout production – see John Ford's “The Man Who Shot Liberty Valence” in 1962, John Sturges’ “The Magnificent Seven” in 1960, or Howard Hawk's “Rio Bravo” in 1959 – most of the Western films that jogged out of Hollywood in late 1950s and early 1960s were products seen as self-parody. Critics, filmmakers, and big box office names had more or less distanced themselves from the genre.

With Leone's films, however, American distributor United Artists sought a strong angle to help boost the release of the pictures in the Americas. They were the first to come up with the notion of "The Man with No Name" – the mysterious character portrayed and immortalized by Eastwood – and therefore, the notion of corralling these films as a trilogy.

The marketing campaign was based around the fact that Eastwood's character in all three films donned the same clothes, and acted, roughly, in a similar manner. In reality, much of the character's costume, including the iconic poncho and sheepskin vest, were brought overseas by Eastwood as part of his own wardrobe from the set of Rawhide. And in terms of the performance, his low-key presence, relying heavily on the physicality of his character over the drawn-out mono or dialogue, perfectly matched Leone's sought-after style; as a result, the Dollars trilogy are among Clint Eastwood's best movies. But even so, the actor had to regularly combat the director over reducing the amount of spoken lines his characters had throughout the series.

The Unofficial Order Of The Dollars Trilogy 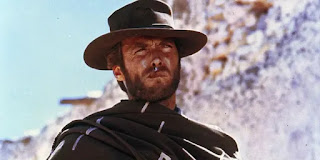 While Leone himself had never intended his three films to be packaged as a trilogy, there are events in the movies that establish a timeline. The unofficial order is “The Good, the Bad and the Ugly” is at the forefront, acting as a prequel to “For a Few Dollars More”, and then finishing with “A Fistful of Dollars”. Remarkably, despite the director's intentions, or lack thereof, the three films do not contain any major continuity errors when viewed as a continuous series.

Given its expansive reliance and commentary on the American Civil War, “The Good, the Bad and the Ugly” is firmly set at the beginning of these three films, despite being the final one to be made. Leone had implemented the infamous American conflict into his film in order to deliver some stark commentary against the brutality of war, primarily using Eastwood's character. It can be argued that this is the most empathetic the "Man with No Name" ever gets in the series. Not only does he uncharacteristically comment on the nonsensical conquest of the bridge seen halfway through the film ("I've never seen so many men wasted so badly"), but he also stops his pursuit of the gold treasure in order to spend time with dying soldiers from both sides of the war.

In terms of events, however, there are many events that establish “The Good, the Bad and the Ugly’s” place at the front of the series. For instance, Eastwood's Blondie slowly picks up the pieces of his iconic outfit throughout the movie before finally donning the whole thing in the wake of the final shootout.

“For a Few Dollars More” takes place after “The Good, the Bad and the Ugly” not only because Colonel Douglas Mortimer (Lee Van Cleef), the vengeful bounty hunter who teams up with Manco to track down an outlaw, is a veteran of the Civil War, but because a newspaper can be seen in the film containing the year 1872. The only factor that puts “For a Few Dollars More” before “A Fistful of Dollars”, however, is that Manco and Mortimer engage in a bravado shooting contest where the target is the "Man with No Name's" hat. The holes from that squabble can be seen in “A Fistful of Dollars.”

Inconsistencies In The Dollars Trilogy 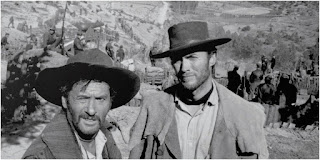 While there are no major continuity errors throughout the Dollars trilogy, the fact remains that Sergio Leone had not intended the three films to be viewed in tandem, and as a result, there are some minor inconsistencies throughout the productions. Most prominently, while United Artists' campaign strategy revolved around branding Clint Eastwood's character as "The Man with No Name," he has a different nickname in each: in “A Fistful of Dollars”, he is referred to as Joe; in “For a Few Dollars More”, he's called Manco; and in The Good, the Bad and the Ugly, his name is Blondie. To be fair, all three of these names, especially the latter, are assigned to the character by other figures in Leone's Wild West.

There are some repeated casting choices throughout the trilogy that also scratch away at the idea of the classic Western movies being a sequential story. For instance, Lee Van Cleef, who played Colonel Mortimor in For a Few Dollars More, also played Angel Eyes (aka "The Bad") in The Good, the Bad and The Ugly. Though Mortimer survived the events of the previous production, his devilish character arc would be nonsensical in the latter, especially if The Good, the Bad and the Ugly took place prior to For a Few Dollars More. Also, Italian actor Gian Maria Volontè played the central antagonist in both A Fistful of Dollars and For a Few Dollars More. In both films, his characters meet a glorified ending at the hands of Western justice. So while these casting choices were certainly made out of necessity and director preference, they tap away at the notion of the Dollars Trilogy.
Posted by Tom B. at 7:31 AM