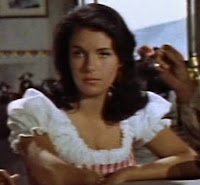 Hammer actress Marie Devereux died on December 30, 2019 in Meridian, Idaho, U.S.A., according to a post on Facebook by her family. Born November 27, 1940 in Edmonton, London, England as Patricia Sutcliffe, she was a nude model in magazines and had a career in films, usually as a sexy girl in comedies, dramas and horror films. After appearing in Terence Young's "Serious Charge", she was seen to good advantage in three Hammer Film productions: first, under the direction of genre master Terence Fisher, she played a follower of goddess Kali in "The Stranglers of Bombay" (1959), and she was one of the "Brides of Dracula" (1960); these were followed in 1962 by John Gilling's "The Pirates of Blood River", in which she played a village girl. She was also in Guy Green's much praised drama "The Mark (1961), and then traveled to Italy to work as the stand-in of Elizabeth Taylor in "Cleopatra" (1963). Devereux went to Hollywood after the production closed in Rome, and appeared in television and two motion pictures directed by Samuel Fuller, "Shock Corridor" (1963) and "The Naked Kiss" (1964). After these roles she decided to marry and have children in the United States, and retired from films. She also appeared in a few television shows including one episode of The Avengers. Marie appeared in one Euro-western as a barmaid in “The Singer Not the Song (1961).
Posted by Tom B. at 4:32 PM