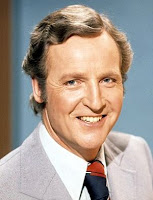 Born Christopher Nicholas Parsons in Grantham, Lincolnshire, England on October 10, 1923, he was an British actor and radio and television presenter. He was the long-running presenter of the comedy radio show ‘Just a Minute’ and hosted the game show “Sale of the Century” during the 1970s and early 1980s. His Euro-western connection was the English voice of Sheriff Tex Tucker, telegrapher Dan Morse and Billy Pinto in the 1960 British TV western series “Four Feather Falls”. He was married to actress Denise Bryer from 1954-1989, who was the voice of Martha 'Ma' Jones and Little Jake on the same series. Parsons died on January 28, 2020 in Aylesbury, Buckinhamshire, England. He was 96.