After the killing of Hart Perkins the scene shifts to a courtroom where a hearing presided over by Judge Cutcher. He states, “After hearing all the evidence Hart Perkins died as the result of an unprovoked attack. During which Mr. Frank Talby exercised his right of self defense.” Talby is asked by Sheriff Nigel if this is the is the first man Talby has killed. Talby says no and does Nigel want him to put notches on his gun. The judge closes the hearing. On his way out of the courtroom Scott is grabbed by Abel Murray who hits him in the stomach. Judge Cutcher tells Murray to wait and hit him outside, saying, “What the law can’t see it can’t punish.” Murray than hits him a blow to the face and tells him to keep his place and to stay out of his saloon. Mitch arrives and tries to stop Murray but he’s thrown out of the courtroom. Scott runs out the door and into the street. 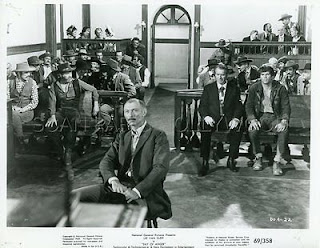 Another scene filmed at the western set at Cinecittà Studio western set in Rome, Italy. The set is part of a theme park today called Cinecitta World.