Subsequently, the old church was purchased by private individuals, who transformed the complex into a farm. The building of the old church was renovated and became the owner's home; the bell tower (which stands out well, even from afar, in many films), the construction still maintains the solid rectangular shape and some sort of buttresses on the southern side; a part of the old wall also survives. Next to this building, instead of other old buildings, today there are large stables and a warehouse. The land to the west, towards the hills, has remained relatively intact, which in western films represented an arid and desert landscape, with harassing pitfalls: attacks by Indians and bandits. In particular, at the beginning of the hills, the area called "Las Salinas de Espartinas" has remained intact, which appears in scenes from the films “The Fury of the Apaches” (1964); “A Pistol for a Hundred Coffins” (1968); “Fifteen Scaffolds for a Killer” (1968); “Ringo, the Lone Rider” (1968); “Another dollar for the MacGregors” (1970) (the salt flats appear in full swing: Indians working in slavery work there); “Raise Your Hands Dead Man, You’re Under Arest” (1972). A few dozen meters to the west, it opens up and is surrounded by arid hills, a canyon whose bottom is covered with high dry grass. When, referring to some films, we mentioned the location of this set, we mentioned Sesena, which is a nearby town in the province of Toledo (whose territory borders on that of Ciempozuelos). In reality, both the old rustic church and the canyon are located in the territory of the municipality of Ciempozuelos, therefore in the provincial of Madrid. Most likely it was mentioned in Sesena because this set and location were reached by film crews from Madrid through the territory of the municipality of Sesena. The area in question is located in the valley that opens at the foot of the new Valle Grande residential district (in the municipality of Sesena), which stands on the left (towards the east) of the N IV - E% highway (autovia de Andalucia). 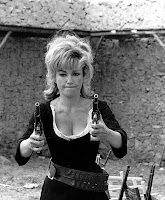 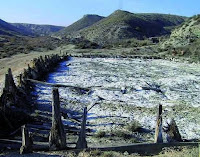 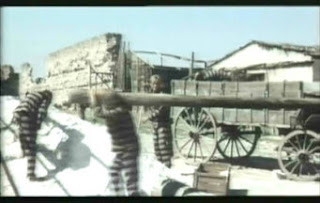