Who Are Those Guys? ~ German Cobos 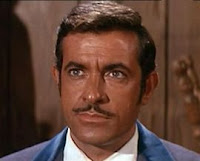 Germán Sánchez Hernández-Cobos was born on July 7, 1927 in Seville, Spain. Germán soon moved to Madrid to study drama at the IIEC film school and at the Conservatory. At the age of 34, he debuted on stage next to Lilí Murati, an Hungarian actress, based in Spain since the late 1940s and who achieved great popularity representing comedies heading her own company. His debut before the film cameras came in 1951, with a supporting role in “La Leona de Castilla”, an unbridled historical melodrama by Juan de Orduña.

In 1954 he became one of the favorite actors of the prolific and successful director Pedro Lazaga, who provided him with more and more relevant characters in films such as “La patrulla, La vida es maravillosa y Cuerda de presos”. In 1955 he accompanied Mario Cabré in Marta, a commercial failure that ended the career of its director, Francisco Elías, a pioneer of Spanish cinematography.

The following year begins an active stage in Spanish-Italian co-productions with “Slaves of Carthage”, with Gianna Maria Canale, Marisa Allasio and Jorge Mistral. In 1957 he also takes part in “The Star of Africa”, a warlike film co-produced with Germany. He works constantly and returns with Marisa Allasio in “Susana, Pure Cream”, a comedy directed by Steno. With this director he will repeat in another comedy, “Operation Popoff”, along with the actress Sylva Koscina and directed by Nino Manfredi. His presence in co-productions with Italy continues at a frantic pace. In “My Wife is a Doctor” with Vittorio De Sica, Abbe Lane and the comedian Toto. In 1961 he performs with Hardy Krüger, Lino Ventura and Charles Azanavour in the war film “A Taxi to Tobruk”, directed by Denys de La Patellière which had great success at the box office.

Germán Cobos will show his status as a "heartthrob" in titles assigned to the most commercial cinema. He works alongside Concha Velasco, Sara Montiel, Argentine Empire, Núria Espert and, in time, Rocío Dúrcal. More selective are his frequent theater roles. In the 1960s his career began to change on the film scene, in secondary roles. Juan Antonio Bardem includes him in the cast of “At Five in the Afternoon” and in 1963 he appears in the cast of “Brillante Porvenir”, a film co-directed by Romà Gubern and Vicente Aranda. Two years later it is Jaime Camino who directs him in “Los feliz sixties”.

In the 70s he is again required by Bardem to recreate the figure of an emigrant in the “Bridge”. which stars Alfredo Landa. Although his appearances are short, he will also work under the direction of filmmakers such as Carlos Saura (“Cría cuervos”, 1976), José Luis Garci (“Alone at dawn”) and Pedro Almodóvar, who in “The Law of Desire” (1987) was entrusted by the character of a priest who rejects the character of Carmen Maura in the choir of his church for his status as a transsexual.

He also worked in television series such as ‘Process to Mariana Pineda’ (with Marisol and Juanjo Puigcorbé), ‘Lorca, Death of a Poet’ (again under the direction of Bardem), ‘Central Brigade, There is No One Who Lives Here...’ Another facet was his struggle for the profession. Most veterans remember his involvement in the 1975 actors' strike, which put Franco in check and whose promoters were Juan Diego and José Sacristán.

He appeared in eight Euro-westerns from 1964’s “Massacre at Fort Grant” to “Limoncello” in 2007 disguised as Jerry Cobb and George Gordon in his first western.

Cobos was married at one time to Visitación Peralta from 1957 until his death on January 12, 2015 in Seville, Andalusia, Spain.