We continue our search for filming locations for “Day of Anger”. Scott leaves the stable and notices Eileen cutting roses from a bush next to her front porch. He tells her they are very pretty but will be dead in a few days. Eileen reminds him that her father told him not to talk to her. She goes into the house with the maid following. Suddenly Judge Cutcher appears from the house. He reminds Scott he’s a bastard whose mother worked at Vivien Skill’s whorehouse and no one knows who his father was. Cutcher tells Scott never to look or talk or come to their house again. Scott then walks away down the main street. 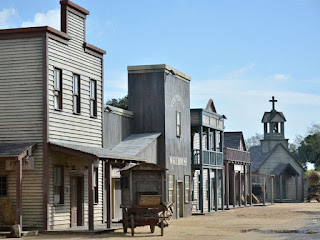 This scene was filmed at the western set at Cinecittà Studio western set in Rome, Italy. The set is part of a theme park today.