David F. Walker , co-writer of the recent series published by ECC , 'Naomi' , together with Brian Michale Bendis , has just announced that he will launch his own series, titled 'The Hated' , alongside cartoonist Sean Damien Hill and colored by Shaun Struble .

According to the description made by Walker himself, the series will be set in a Spaghetti western, in which he poses an alternative story where the American Civil War ended very differently from the known one. 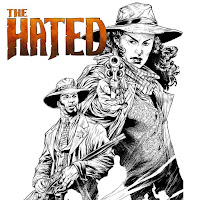 'The Hated', edited by its own Solid Comix label, is scheduled to go on sale in US stores in the spring of this year.