Elspe: Jochen Bludau has given up the management

Philipp Aßhoff has been the new managing director of Elspe Festival GmbH since the beginning of the year 2020. 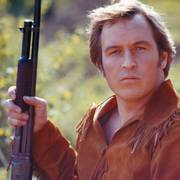 Jochen Bludau (photo: as Old Shatterhand 1977 in Elspe) says goodbye to the management in Elspe.

Two years ago, Jochen Bludau, head of the Elspe Festival and long-time "Old Shatterhand", had exclusively informed KARL MAY & Co. that he wanted to leave the management of Elspe Festival GmbH at the end of 2019. In an interview at the time for the special issue of KARL MAY & Co. on the history of the Elsper Karl May Festival, he said: “You shouldn't overuse a management position. That means that I will give up this task next year. "

He’s now put that into practice. "I was on December 31st. retired from the management. Philipp Aßhoff will be the new managing director from January 1, 2020,” the 78-year-old told KARL MAY & Co.

Philipp Aßhoff has been active in sound direction for many years and also in the management of the Elspe Festival. At the end of 2017, Aßhoff became the sole authorized representative of Elspe Festival GmbH.

It is not Jochen Bludau's first retreat from the Elsper management. He had already seen the time come to put festival management in a different hand and, after around 40 years, handed over to his colleague Rolf Schauerte at the end of 2009, who had been the manager alongside Bludau since 2008. Schauerte was replaced in 2011 by Jochen Bludau's son Oliver, who also followed in his father's footsteps on stage: as Old Shatterhand. But Oliver Bludau, who died in November 2019 at the age of only 47, surprisingly handed the management back to his father in 2014.

In the coming season, the Elsper Karl May Festival will perform "The Oil Prince". The premiere is on June 20. For the first time, the production, which has often been shown in Elspe, will not feature Old Shatterhand but Old Surehand as a hero alongside Winnetou (Jean-Marc Birkholz). The background is the farewell of the Old Shatterhand actor Kai Noll. Who is going to play Old Surehand is still open.