Casa de Campo is a large park in the Spanish capital of Madrid, inside this area are various buildings, including one in the Andalusian style, with a large column, used as a set in some western films, including “Torreon City” (1962); “Zorro the Avenger” (1962) (where it looks like a market); “A Fistful of Dollars” (1964) (represents the interior of the Rojo hacienda in San Miguel, both in day and night scenes); “Seven Guns for the MacGregors” (1965), where it represents a hacienda in which several scenes take place, in particular in the large patio the one in which Robert Woods is frustrated and that of the final clash in the "noria" (an ancient agricultural structure, composed of a wheel with small wooden buckets to draw water) between Robert Woods and Leo Anchoriz, who remains trapped there and drowns. The building in question, is also used in “The Fury of Johnny Kid” (1967), “Dynamite Joe” (1967), “Zorro's Latest Adventure” (1970). It was then radically renovated and today it houses an elegant restaurant. 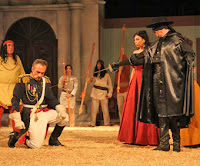 “Seven Guns for the MacGregors”

“The Fury of Johnny Kid”