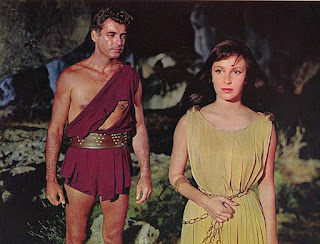 Rory Calhourn stars as Dario and Lea Massari as Diala in Sergio Leone's feature film debut "The Colossus of Rhodes," a peplum or sword and sandal film.

In addition to being the KPBS arts reporter, I also volunteer as a film programmer through Film Geeks SD and co-host a pair of annual film series at Digital Gym Cinema. This Sunday marks the launch of a monthly series on Italian Genre Cinema and Monday night is the start of Gearhead Cinema.

As much as I love my job, I love film programming even more. There is nothing that gives me greater joy than programming films to share with audiences and to provide a context and an opportunity for film geeks to, well, geek out over film.

This is the sixth year Film Geeks SD has been programming at Digital Gym. My main partner in crime for this is Miguel Rodriguez of Horrible Imaginings Film Festival. We volunteer as programmers and through our Film Geeks Facebook page, we poll followers about the themes for our yearlong series. This year, people voted for Italian Genre Cinema and Gearhead Cinema. Our goal is to present films in either a context of film history or from a more social perspective.

American actor Lee Van Cleef made a name for himself in the 1960s starring in Italian spaghetti westerns like Giulio Petroni's "Death Rides a Horse" in 1967.

For the Italian Genre Cinema series, Film Geeks will be be partnering with San Diego Italian Film Festival (SDIFF) to take audiences through the evolution of Italian popular cinema starting in the 1950s with the peplum or sword and sandal films, then moving on to the 1960s with spaghetti westerns and then finishing in the 70s and 80s with giallo and poliziotteschi. SDIFF artistic director Antonio Iannotta will be providing context for the films and each film will be preceded by trailers of other films that helped to define the genre. We are also planning to showcase the Italian comedy by Vittorio De Sica "Yesterday, Today and Tomorrow" starring Sophia Loren and Marcello Mastroianni at SDIFF in the fall.

The film series launches Sunday, Jan. 12 at 1:00 pm with "The Colossus of Rhodes," which is a peplum or sword and sandal film. The Italian film industry was looking to cash in on the popularity of American Biblical epics like Cecil B De Mille’s "The Ten Commandments." It wanted something that looked like a Hollywood film, which appealed to Italian audiences, and something that they could also export back to America to cash in on an additional market. These were called peplum films (a Latin word for a Robe of State). Italy had been producing these sword and sandal films from the silent days but the Second World War devastated the Italian film industry, which rebounded with highly respected Neo-Realist films as well as more popular genres like low budget comedies and a return to sword and sandal films. And while inspired by Hollywood Biblical epics, peplum films took a more fun tact. Instead of trying to serve up profound drama steeped in history, most peplum films aimed lower and went for lavish sensuality mixed with fantasy. "The Colossus of Rhodes" is the first feature film of Sergio Leone who would go on to define the spaghetti western in the following decade.

Reg Park is Hercules in Mario Bava's "Hercules in the Haunted World."

Now, I teased you in the headline with the fact that Godzilla played a role in all this and he did. The rejuvenated genre took off after producer Joseph E Levine had successfully imported "Gojira" to America by inserting an American actor (Raymond Burr), dubbing the film into English, and rechristening it as "Godzilla, King of the Monsters" in 1956. So, inspired by that financial success he decided to buy and repackaged an Italian low budget film as "The Labors of Hercules" in 1958 and the peplum film was off and running.

The series will also highlight another director better known for his later genre work, Mario Bava. Bava would direct classics of Italian horror such as "Black Sunday," but earlier in his career he made the crazy "Hercules in the Haunted World."

But the genre began to die out in the mid-1960s thanks to decreasing budgets, stale scripts, and just plain wacky storylines. The death knell came when Sergio Leone and Sergio Corbucci decided to move on to a new genre. Swords and sandals were traded in for six-shooters and ponchos, and by 1965 the peplum had pretty much died and were replaced with the new exploitation boom of the spaghetti western.

Director Sergio Leone loves the landscape of the human face. For "Duck, You Sucker" in 1971 he tapped American stars James Coburn (pictured here) and Rod Steiger.

The spaghetti western, a term used to refer to western genre films churned out cheaply by the Italian film industry and often dubbed into English, was born in the 1960s as the Italian film industry was looking for something new to strike a cord with filmgoers.
Leone had an idea. He had seen Akira Kurosawa’s “Yojimbo” and decided to reimagine “Yojimbo” as a western with a young American lead. That role went to Clint Eastwood who was enjoying success on TV’s “Rawhide.” But his contract did not allow him to make features in the U.S. so he went to Italy and became an overnight sensation as the Man with No Name in Leone’s “A Fistful of Dollars.” We will screen the sequel, "For a Few Dollars More", in April.

Leone's westerns served up a new kind of western hero or rather anti-hero. He was a more ambiguous and morally flexible character that could reflect the political and social unrest in Italy and elsewhere in the world. Legendary graphic designer Iginio Lardani and innovative composer Ennio Morricone contributed elements that defined the style of these films.

The genre definitely imitates American westerns but filters it through Italian style and a more modern lens. Spaghetti westerns bring in elements of Catholicism (priests, angels, churches, protagonists being crucified); politics reflecting turbulent times and unsettling ambiguity; over the top violence; and younger, attractive stars who suggested that heroes didn’t necessarily have to be “good guys”, just hip and cool.

As spaghetti westerns suffered from the same burnout as peplum, giallo and poliziotteschi films began to provide new popular entertainment to attract both Italian and international audiences. The word “giallo” translates literally as “yellow”. But it became synonymous with a particular style of literary thriller that got its name from the cheap yellow covers of the novels published in Italy in the ’50s and ’60s. The films would be the harbingers of the American slasher film. The series will showcase "Lizard in a Woman's Skin" and "The Strange Vice of Mrs. Wardh." Did I mention that Italian genre films have the best titles? Well they do.

Appreciating giallo is important in understanding the evolution of genre cinema, and its roots reflect filmmakers dealing with social changes and upheavals through their art. It’s easy to dismiss giallo as mere exploitation or as lurid and misogynistic if you only look at it in passing or on the surface. But giallo represents a challenge and a provocation to repressive social norms and to cinematic expectations. It deliberately and slyly pushed people’s buttons with its explicit violence, fetishistic sexuality, pulsing scores, and over the top style. It turned exploitation in art and seduced us with the beauty of horror. The poliziotteschi or police thrillers were a natural progression from the giallo films and the two screening in this series are "The Big Racket" and "Contraband" and they close out the series in November and December.

Gearhead Cinema showcases a diverse range of films in which the cars are the stars. So there are cult films like "Vanishing Point" and "Road Warrior," classy racing films like "Grand Prix," art house films like Walter Hill’s "The Driver," and then delicious cheeseball films like "Hot Rods To Hell" that kicks off the series on Monday, Jan. 13 at 7:30 pm.

"Hot Rods to Hell" was made in 1967 with Dana Andrews as the square dad harassed by some young thugs. It feels like a film out of sync with the times and would seem more at home in the 1950s with all those sensational juvenile delinquent movies. But it is a fun piece of B movie cheesiness with Hollywood stars Andrews and Jeanne Crain acting their hearts out. This is a very different flick from the more serious car films like "Grand Prix" and "Le Mans" (which stars off screen gearhead Steve McQueen). But we wanted to showcase the broad range of car movies that have been made. We will be having a stunt driver, Steve Lepper, come and introduce select films and provide insights into how a film like "Grand Prix" was made and why gearheads like himself are so in love with it.
Italian Genre Cinema kicks off this Sunday and continues one Sunday a month through the year while Gearhead Cinema is one Monday night a month.

If you want to go into more depth on giallo then check out my archive podcast with two experts on the topic.

Italian Genre Cinema
One Sunday a month at 1:00 pm