The 19th century Australian bushranger at the center of True History of the Kelly Gang is a figure that looms large in the nation's folkloric iconography, inspiring an array of depictions across various mediums — literature, fine arts, movies, theater, music, TV, video games — as vast and wide as the land that spawned him. The Robin Hood-like renegade hero of the Antipodean common man, Ned Kelly gets a ripping reinvention in director Justin Kurzel's feverish punk Western, a raw rebel yell of a movie that combines visceral violence with a kind of delirious, scrappy poetry.

The brawny film is driven by a performance of bristling intensity, madness and blazing, bedeviled anger that should put George MacKay more firmly on the map, together with his lead role in Sam Mendes' upcoming WWI drama, 1917, later this year. Kelly Gang also showcases flavorful work from Kurzel's wife, Essie Davis, this time not cowering from danger as she did in The Babadook, but staring it down like an Outback banshee. Often, she unleashes a stream of gloriously obscene invective as Ned's mother Ellen, an Irish settler whose hatred of the English colonialists plants a fertile seed of rebellion in her son.

Then there's a wonderfully chewy supporting turn from Russell Crowe as the bear-like outlaw who indoctrinates the initially reluctant young Ned into a life of anti-establishment crime, and fabulously louche work from Nicholas Hoult as the epitome of sneering English authority.

Those assets, along with the bold visual flourishes, the invigorating use of an unconventional score by the director's brother Jed Kurzel and the thriller's enveloping, almost other-worldly sense of timelessness should supply enough impact internationally to erase the memory of the filmmaker's stumble with Assassin's Creed. Kurzel reteams here with Shaun Grant, the screenwriter who helped establish him with his 2011 debut The Snowtown Murders — a real-life killing spree that was hard to watch in its unflinching brutality but announced a commanding stylistic talent. The result is his best film to date.

Grant's script is based on the Booker Prize-winning 2001 novel by Peter Carey, a madly inventive chronicler of fictionalized Australian history whose unreliable narrators hold a surreal mirror up to the country's past to reflect on its present. "Some strange tale from an ancient world," is how Ned himself describes his story toward its fatal conclusion, and that suggestion of momentous legend is backed up from the stunning opening image — a magnificent drone shot of a man in a scarlet dress, streaking on horseback across a scorched plain flecked with gnarled trees that reach out of the earth like claws. Cinematographer Ari Wegner paints a vivid landscape out of the eye-catching locations in regional Victoria.

That horseman — whose unconventional attire will be echoed in the Kelly Gang's habit of wearing women's frocks on their exploits, because "Nothing scares a man like crazy" — is Ned's father John "Red" Kelly (Ben Corbett). Opening voiceover frames the version of history we will hear as Ned's written account for the daughter he will never know, a bid from beyond the grave to make her think less harshly of her father than he did of his. (Carey freely mixes fact and fiction in his novel; Ned Kelly is not known to have fathered any children.)

Red is a drunk and a lousy provider for his family, forcing his scornful wife Ellen to earn a buck where she can, including by sexually servicing local lawman Sergeant O'Neill (Charlie Hunnam). Preteen Ned — well played by Orlando Schwerdt, his defiant strength doing battle with the character's vulnerability — watches this lurid spectacle through a horizontal seam in the tin shack where they live in the middle of nowhere. (That narrow aperture anticipates the letter-box eye-slot in the famous metal helmets later worn by Ned and his gang.) The young Ned is so disgusted by his father and eager to please his mother that he comes home with a bleeding leg of beef he's hacked off some unfortunate cow.

For a brief moment in childhood, Ned is no longer a ruffian Kelly but "an angel sent by God" in the words of well-heeled Brit Mrs. Shelton (Claudia Karvan), whose young son he saved from drowning. Ned gets a taste of what it's like to wear clean clothes and play in a grand house, but when Mrs. Shelton offers to pay the boy's tuition to attend a posh boarding school, proudly Irish Ellen spits the charity back in her face, saying the English have been "trying to bleed our culture out like they did to the blackfella before us."

Ellen has other ideas for Ned. Once Red is out of the picture, she sends Ned up north to steal cattle with notorious bushranger Harry Power (Crowe), whom it's suggested (here and in Carey's novel, though not in recorded history) may be another of Ma Kelly's lovers. A larger-than-life figure with his wild beard and ample girth, Harry makes no secret of his loathing for O'Neill, and he leads the Kelly kids in a crude anti-cop ditty around the dinner table. But Ned's brutal apprenticeship with Harry proves not what he was expecting, hurting the boy deeply when the peculiarities of his mother's love for him come to light. The experience also lands him in prison for a stretch.

When Ned returns to his childhood home 10 years later (now played by MacKay) with his friend Joe Byrne (Sean Keenan), he's been toughened up by jail and become a formidable bare-knuckle boxer, fighting for the entertainment of toffs and infantry. His younger brother Dan (Earl Cave, son of musician Nick Cave, who has done his own share of Ned Kelly mythmaking) and buddy Steve (Louis Hewison) have taken up horse rustling, while the still-earthily-sensual Ellen intends to marry a cocky young Californian, George King (Marlon Williams).

Ned also encounters the posh Constable Fitzpatrick (Hoult), who expresses his cultural disdain for the primitive surroundings quite openly, but whose coziness with Kelly in a local brothel packs a playful homoerotic frisson. But Ned is more taken with shy Mary Hearn (Thomasin McKenzie), who seems an innocent despite the establishment she and her bastard child call home. When the womanizing Fitzpatrick tries using his position to take predatory ownership of Ned's little sister Kate (Josephine Blazier), things turn messy for both Ned and Ellen.

Kurzel's storytelling also turns wilder and woollier once Ned is spurred back to a life of crime. He hits the road with Dan and their mates, calling themselves the Sons of Sieve in a nod to their Irish roots as they go on a series of raids, ambushing cops and robbing banks. This feeds their fame as folk heroes in the class struggle and helps grow their ranks. "We are but stolen men in a stolen land, and we are going to take back what is rightfully ours," writes Ned. But the fateful Glenrowan showdown with an incoming trainload of cops doesn't go as planned, as anyone familiar with the bushranger's legend will know.

The thrashing, uncontrolled quality of the blood-drenched climactic action, while it doesn't always make for narrative clarity, does fit with the doomed anarchic crusade of the antihero. And as nemeses on either side of the law, MacKay and Hoult take deep dives into their characters, the latter unscrupulous in his unsavory attempts to use both Ellen and Mary to get to Ned.

Arguably a slight flaw in the conclusion is the choice to spend time on a long speech by Thomas Curnow (Jacob Collins-Levy), the schoolteacher who foils Ned's plan at Glenrowan. Ned has absorbed the lesson that "every man should be an author of his own history," so giving voice to another supercilious colonialist at that point seems like slapping betrayal upon betrayal. The ending might benefit from losing that scene altogether, closing more succinctly with the sorrowful reaffirmation of the love and pride Ellen feels for Ned, and the haunting image of execution. But quibbles aside, this is an electrifyingly original retelling of a tale carved out of Australian myth.

Story: The story of Australian bush-ranger Ned Kelly and his gang as they flee from authorities during the 1870s. 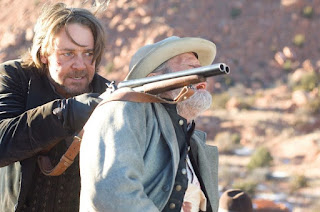