Voices of the Spaghetti Western “A Few Dollars for Django” 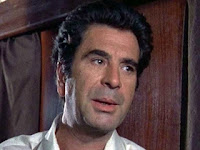 Giancarlo Maestri was born in Trento, Trentino-Alto Adige, Italy on November 10, 1933. He was the son of actor Toni Maestri and brother of actress Anna Maestri ]1924-1988]. Giancarlo split his career as a film actor and a voice actor. He appeared in 35 films and was known for his work on “Caravaggio” (1967), “Valley of the Lions” (1961) and “La badessa di Castro” (1974). He died on November 11, 1995 in Trento. As a voice actor he was dubbed the voices of such actors as Sean Connery, James Caan, Burt Reynolds, Paul Newman, Dennis Hopper, Warren Beatty, Robert Duvall, Kris Kristofferson and was best remembered as the TV voice of Andy Griffin on ‘Matlock’. Maestri died on November 10, 1995 in his hometown of Trento, Italy.
Posted by Tom B. at 7:06 AM