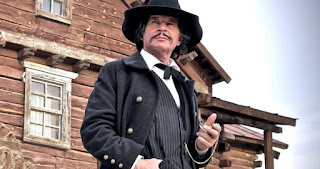 Now available on digital, and available November 19 on DVD, Rene Perez's Once Upon A Time in Deadwood concerns a notorious gunslinger who is slipped a slow-acting poison by an heiress and told he has three days to track down and rescue her sister, who has been kidnapped by a band of hoodlums and holds the antidote. We speak to the film's star, Charles..er, Robert Bronzi.

I have to say no, I'm not his reincarnation. I'm his double. I was born with this face, with this body and with this talent. I have used my appearance to my advantage throughout my career as a stuntman and actor. I'm grateful for the resemblance to Bronson and I'm very proud to be his double. Charles Bronson always was and will always be my favorite actor.

When was the first time you realized you looked like the iconic actor? Did someone mention it to you?

Pretty much my whole life when I was a young man I started to cut my hair and moustache like Bronson. Many years ago in Hungary I worked as a horse breeder and horse trainer. At the horse breeding center we had a lot of visitors every day, people told me "hey boy! You know you look like Charles Bronson?" I worked with my very good friend Peter, he would always say that I looked like him, and he began to call me Bronzi. So he gave me my nickname. After that everyone called me Bronzi and it become my artist name. 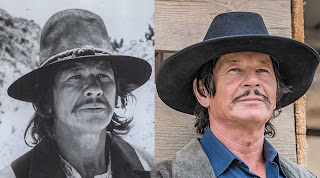 And when was the first time you purposely embodied his presence for a production?

In my first film years ago in Spain at the western village, where I worked as a stunt performer. That was a short film called American Night, the film director was Julian Rosefeldt from Germany. In this film I was Bronzito a Mexican cowboy. I had a small role in the movie, but anyway I was very satisfied with it.

Did you ever meet him?

Unfortunately I didn't meet him personally. But I wanted to meet him and tell him that I'm very proud to be his double, and find out what he thought of me.

Have you heard from any of Bronson's relatives? They must be shell-shocked - you look so much like him!

No, I haven't heard from them. Maybe they don't know about me. I would be interested to know what they think about me.

Death Kiss, which came first, was your homage to Bronson's Death Wish. What do you recall about the shoot?

The resemblance created many opportunities for me, like to have the lead role in the Death Kiss film. I tried to do everything well with my best knowledge and talent as an actor. I should say yes, I think this is my best homage to Charles Bronson as an actor, and for his Death Wish movie. I really enjoyed the shooting, it was very easy to work with the film director Rene Perez. Moreover I was lucky to work with some very talented and professional actors like Eva Hamilton, Daniel Baldwin and Richard Tyson. Everyone on Death Kiss set was helpful and professional. They are amazing people.

And whose idea was the film?

It was Rene Perez who wrote the Death Kiss movie. I suppose when Rene started writing Death Kiss he had a vision of giving me the lead role in the movie. He told me a few sentences about his plan, but he was very mysterious.

And it was so successful, that you've now gone to do some more tributes to Charles Bronson.

I have made some films and commercials in Europe, but really this film exposes me to bigger audiences and American fans. 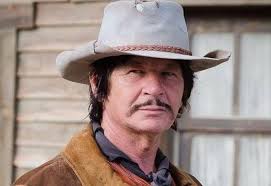 When was Once Upon A Time in Deadwood shot? Where did you shoot?

The Once Upon a Time in Deadwood movie was shot this year in January. We started filming the first part in Spain at the same village where more than fifty years ago Sergio Leone shot the Once Upon A Time in the West movie with famous actors like Charles Bronson, Claudia Cardinale, Henry Fonda etc. The second part and finish of the movie we shot in northern California.

Is this your first western? How different was it to doing an action movie - like Death Kiss?

My first western style movie was shot three years ago, also with Rene Perez the film director, the name of the film was From Hell To The Wild West. This is the western movie with horror elements. So Deadwood is my second western movie.

They are two different films if we see the themes, but the actions and the gunfight scenes are very similar.

It must be pretty empowering getting to wear the cowboy gear?

I don't think so, I very much like to wear it. I performed at western shows in Hungary and Spain over the years and to use every day the cowboy gear in front of the live audiences is what I really enjoyed.

Did you have to do any weapons training for the film?

I train regularly with replica firearms. The gun part comes naturally. As a stuntman at the western shows I used six-shooter colts and rifles every day in the live shows.

What about stunts? Do you do your own stunts in the film?

I work hard to keep my body in shape. I am a sportsman. Moreover in Hungary I have some good friends and they help me get ready for the movies. They teach me martial arts such as Judo and Thai-boxing , and three times a week I visit the Gym. All of this helped me in my preparation for the movies. So, I have to say that, I'm my own stuntman!

If this one is a hit, do you see yourself doing a series of films that serve as a homage to Bronson? Any you'd personally like to do?

I'm grateful for the resemblance that I have to the great Charles Bronson and everything that I'm doing for my part is a deep respect to him. I would love to do the sequel of Death Kiss, or to have a role in any other similar kind of Bronson film, but it doesn't just depend on me. One thing is for sure!, The Stranger still has much work to do! Don’t you agree? 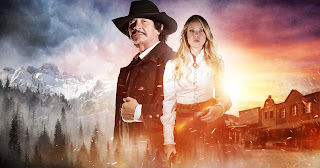