Dianik Zurakowska, the Congolese who was sister-in-law to Carmen Sevilla 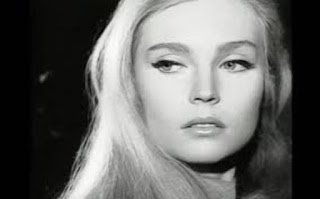 Congolese Dianik Zurakowska appeared in multiple films of the 60s and 70s.

The Spanish cinema of the mid 60's and 70's incorporated foreign beauties, in search of novelties. Sculptural models, blond faces to contrast with the natives, with a predisposition for high-pitched scenes, were common in comedies. In the case at hand today, with Dianik Zurakowska as the protagonist, she diversified her appearances on the screen in other genres: terror, spaghetti western, suspense ...

Dianik Zurakowska , whose name appeared in deals and publications sometimes with altered spellings and which looked Russian, she was actually from the former Republic of the Congo, then Zaire. Wrong are the biographical records that, therefore, considered her Belgian. Born in Elizabethville in 1947, daughter of Polish and Norwegian. The fact is that in the mid 60's she landed in Madrid where she shot her first film. And in Spain she continued to live and develop her acting career for a decade. Blonde, with clear eyes, I think that are blue, whitish face, look between naive and enigmatic, served for several directors and producers who tried to turn her into a "sex-symbol".

Dianik's voice was doubled as her foreign accent required it. We remember some commercial tapes, such as Two Magazine Girls, with Lina Morgan, and Separate Marriages. The most dramatic cut and exhibiting the beauty of her gaze, was The Lost Eyes. Dianik Zurakowska came to appear in about thirty films. Paul Naschy had her in his deals, although she ended up being upset by the treatment she received from the actor and director Gore. The truth is that the werewolf brand and some other title with it ... left it marked.

Perhaps an independent woman, she did not give papal for the whispering press. Very disciplined, she learned to handle the "play-back", figuring to sing when who really did it through a couple of lyric pieces was a soprano. It was in a series of Spanish Television, directed by the imaginative and great creator Fernando García de la Vega, in Bohemios a and Las Golondrinas : "Anthology of the Zarzuela".

And one day, José García Galisteo, brother of Carmen Sevilla, Pepito for the world of cinema, much appreciated as an assistant cameraman and director of photography, turned on the charms of Dianik Zurakowska and made her his companion. Until they priced and each one looked for the sentimental life on the other hand. Dianik, a polyglot, traveled to the United States and then settled in Paris, where he shot more films. But here, we have lost sight of her, let's say more than forty years ago. What does not prevent us from continuing to remember her great beauty.
Posted by Tom B. at 6:17 AM