Western Classics at 50: The Desperados 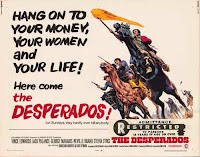 We look back at Jack Palance in the 1969 Spaghetti western.
Long after he scored an indelibly intimidating impact as hired gun Jack Wilson in the classic 1953 western Shane, Jack Palance continued to be a fearsome presence in several Spaghetti Westerns (and Spaghetti Western-flavored, American-produced oaters) throughout the 1960s and ‘70s. Exhibit A: The Desperados, a filmed-in-Madrid action drama featuring Palance as Josiah Galt, the fanatical leader of Southern-sympathizing marauders who continue to wreak bloody havoc long after the Civil War ends.

Directed by Henry Levin (Where the Boys Are, Journey to the Center of the Earth), the movie focuses on the efforts of David Galt (Vincent Edwards), Josiah’s conscience-stricken son, to leave the ranks of his father’s outfit, even as his brothers Jacob (George Maharis) and Adam (Christian Roberts) remain loyal to dear old dad. After barely escaping execution as a “traitor,” David reunites with his wife Laura (Sylvia Syms) and their young son to start a new life under assumed names in a Texas town. Life there is peaceful — for a while. But then comes the day for a fateful family reunion.

Columbia Pictures didn’t do much to promote The Desperados, and opened it mostly on the bottom half of double bills. (A personal note: I saw it on my first date with my college freshman sweetie in New Orleans, along The Southern Star, a diverting but disposable action comedy starring George Segal, Ursula Andress and Orson Welles.) Over the years, however, this violently entertaining B-movie has found a receptive audience through cable and home-video exposure. And, yes, Jack Palance is pretty dadgum scary here. 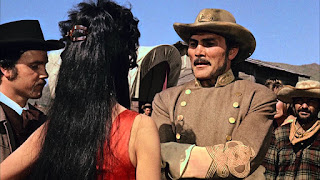