Who Are Those Guys? ~ Günter Clemens 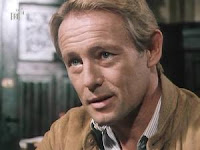 Günter Clemens was born in Augsburg, Bavaria, Germany on May 6, 1941. He studied at the Munich Drama School and began his acting career on stage at various German theaters among which was the Volkstheater and the Residenztheater in Munich. He became known for his role of “Martin von Beyenbach” in the television series ‘Fernsehserie Verbotene Liebe’ which he played from 2000 until 2001. He was also known for his roles in the TV series ‘Alle my Daughters’ and ‘Verbotene Liebe’ (1995), ‘Klinik unter Palmen’ (1996) and ‘Sturm der Liebe’ (2005). In all Clemens appeared in over 100 films and television series from 1962 until 2016. His only Euro-western appearance was as Joe in the 1972 film “Cry of the Black Wolves” directed by Harald Reinl and starring Ron Ely and Raimund Harmstorf.

Clemens is the father of actor Oliver Clemens born in 1973.
Günter Clemens died in Wuppertal, North Rhine-Westphalia, Germany on December 31, 2016.