We continue our search for film locations for “The Relentless Four”. While Alan cleans out the safe in the sheriff’s office, Ranger Garrett rides into town and dismounts in front of the sheriff’s office. Garrett tells Alan to come out unarmed. But he starts shooting at Garrett through the window of the office. Alan makes run for it out the front door and down a side street. Garrett goes in pursuit following a trail of bills Alan has dropped as he tries to escape. Tracking him to the stable Alan bursts out on a horse and is shot down by Garrett. Alan tumbles from the horse but his foot gets caught up in the stirrup and is dragged through town while the money blows out of the saddle bag onto the street. 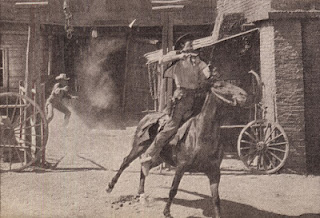 This scene was filmed at the Mini Hollywood / Oasys movie set. 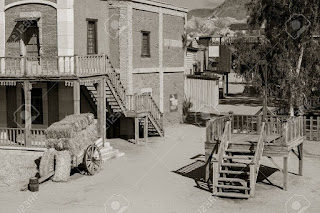