Forget Hollywood - the world's first Western was shot in the countryside of Lancashire, new research has suggested.

Kidnapping By Indians was filmed in 1899, four years before The Great Train Robbery, which until now was widely seen as the genre's first film.

Artist Jamie Holman made the link to Lancashire in a study of records by the British Film Institute (BFI).

Mr Holman said the information, which showed a filming location close to Blackburn, was "hiding in plain sight". 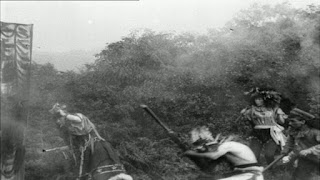 The one-minute movie is now due to be shown in a public screening in the town, which was once home to the pioneering film makers Mitchell and Kenyon.

Mr Holman, who has researched links between the cotton industry and film history, said: "Blackburn had links to the Wild West.

"Cotton workers had worked in the USA and they told stories of the wild frontier.

"Mitchell and Kenyon would have been aware of the appetite for the Wild West at the time. Many of the stereotypes are there: the head-dress; the tomahawks."

Mitchell and Kenyon's films documenting everyday life around the British Isles have become much loved since they were discovered in barrels underneath their former Blackburn headquarters in 1994.

That same haul also included their far lesser known work in the field of what were known as "narratives", fictional films - including this Western. Sixty-five of them are now stored at the Cinema Museum in London.

Their factual footage has been pored over, broadcast on BBC One and released on DVD. Now it could be time to do the same with their "narrative films". Maybe there could a precursor to Star Wars in there.

The film - which is owned by a private collector - will be shown on Saturday alongside a Wild West-themed parade.

It follows the plot of a young girl being kidnapped by native Americans before being rescued in a gunfight.

Shot in fields close to Blackburn, the producers used local actors, including some made up as native Americans in a way that might seem unpalatable in the 21st Century but would have been regarded differently at the time.

Most film critics had cited Edwin S Porter's The Great Train Robbery, based on a real raid by outlaw Butch Cassidy, as the first Western.

It is celebrated for introducing techniques such as composite editing and frequent camera movement.

But Mr Holman said the Lancashire-produced film had been overlooked, and other film experts have agreed.

Mr Holman said: "The Mitchell and Kenyon film was in plain sight on the BFI website. I just put it in context."

Who were Mitchell and Kenyon?

From their shop in Blackburn, Sagar Mitchell and James Kenyon produced commercial movies to be shown at fairgrounds
They produced fictional features as well as dramatizing contemporary news stories such as the Boer War
A 1994 discovery of their film negatives revealed the world's largest surviving collection of early non-fiction films