Sampling “The Other Sergio” – Sergio Corbucci 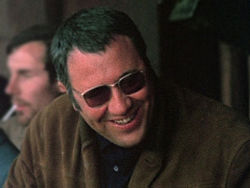 We look back at the Italian filmmaker’s notable Spaghetti Westerns.

For years, Italian filmmaker Sergio Corbucci was saddled with a less-than-complimentary nickname – “The Other Sergio” – because his own Spaghetti Westerns often (well, to be more precise, just about always) were overshadowed by those of his contemporary, the great Sergio Leone. But critics, academics and diehard movie buffs have long championed Corbucci’s works as classics in the own right. Now that Quentin Tarantino – an enthusiastic fan and admirer – has unleashed Django Unchained, an epic western partially inspired by Corbucci’s violent sagebrush sagas, you might want to sample the cinema of the “Other Sergio.”

Minnesota Clay – Cameron Mitchell (who later role tall on TV’s The High Chaparral) plays the title role in Corbucci’s first significant western, a middle-aged gunfighter who escapes from a forced-labor camp to force a treacherous former colleague to clear his name. Unfortunately, the varmint now is employed as sheriff of Clay’s hometown. Even more unfortunately, Clay’s eyesight is failing, which proves to be a serious impediment as he battles the sheriff, his deputies and a gang of Mexican outlaws. Movie buffs, take note: Quentin Tarantino is such a fan of this one that he placed it among the runners-up on his list of all-time favorite Spaghetti Westerns — and features a specific visual reference to the title during a shootout scene in his own Django Unchained. (1965)

Django – While freely riffing on Sergio Leone’s then-recent A Fistful of Dollars (1964) – which in turn was an unauthorized remake of Akira Kurosawa’s Yojimbo (1961) – Corbucci concocted his own classic Spaghetti Western, a bloody good action drama starring Franco Nero (pictured above) as a former Union solider who wanders into a Tex-Mex border town – dragging a large coffin that turns out to contain a Gatling gun – and proceeds to turn members of rival gangs against each other. Yes, that’s Nero himself making a cameo appearance in Django Unchained, asking Jamie Foxx’s slave-turned-bounty hunter how the latter spells his name. (1966) 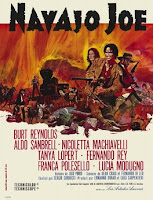 Navajo Joe – Like many other American actors during the mid-1960s, Burt Reynolds journeyed to Europe in the hope getting a career boost from starring in a Spaghetti Western. (Hey, it worked for Clint Eastwood, right?) The good news: He landed a starring role in a Sergio Corbucci movie, playing a taciturn Navajo warrior on the trail of savage scalphunters who murdered his wife, massacred an entire Indian camp, and set their sights on robbing money intended for a small-town bank. The bad news: As Reynolds would joke for years after the fact, he mistakenly signed up for a movie by the “wrong Sergio.” Truth to tell, though, it’s doubtful that Leone would have given him such a showy role. (1966)

The Hellbenders – In the aftermath of the Civil War, Col. Jonas (Joseph Cotten) compiles a simple but ambitious to-do list: “Reorganize the Confederate Army. Attack the Union. Take back the South. Form a new government.” Along with his sons, he hijacks a US Cavalry convoy transporting banknotes, kills everyone in a blue uniform – and their horses, and a couple of his own flunkies for good measure – then sets out on a long hard ride across Spain and Italian locales doubling as Texas. And, mind you, all of that happens during just the opening minutes of Corbucci’s relentlessly violent and darkly ironic western. The rest of the plot involves phony widows, Mexican bandits, two coffins (neither one containing a Gatling gun), unfriendly Indians and a string of fatally inconvenient coincidences. (1967)

The Mercenary – Purists insist that this one isn’t is a Spaghetti Western, but rather a Zapata Western – part of a subgenre of ‘60s and ‘70s Italian-produced westerns set during the Mexican Revolution of 1913. Whatever. It’s still a typically exciting Corbucci action drama, involving Paco (Tony Musante), a Mexican peasant, and Sergei Kowalski (Franco Nero of Django), a Polish mercenary, unlikely allies who improbably become revolutionaries. Before they can do so, however, Sergei actually has to explain to Paco just what a revolution is. Jack Palace figures into the plot as an outlaw named Curly – the same name given to the character he later played to Oscar-worthy perfection in City Slickers. (Tarantino would later use this movie’s theme for his own Kill Bill: Vol. 2.) (1968)

The Great Silence -- “Corbucci’s heroes can’t really be called heroes,” Tarantino told the New York Times last year. “In another director’s western, they would be the bad guys… [H]is West was the most violent, surreal and pitiless landscape of any director in the history of the genre.” Nowhere is this truer than in The Great Silence, a singularly bleak drama in which Jean-Louis Trintignant’s mute gunslinger is no match for Klaus Kinski’s maniacal outlaw. “The bad guys win,” Tarantino marveled, “they murder everybody else in the town, they ride away and that’s the end of the movie. It’s shocking to this day.” (1968) 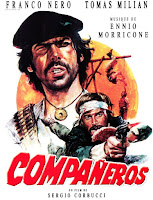 Compañeros – One of the last great Spaghetti Westerns – or, if you prefer, Zapata Westerns – also is the last collaboration of Corbucci and Django star Franco Nero. Nero plays – yes, you guessed it – another mercenary, this time a cynical Swede named Yodlaf Peterson. At the bidding of a corrupt general, Person and peasant-turned-revolutionary El Vasco (Tomas Milan) cross the border to free an imprisoned pacifist professor who might help the general break into a safe stocked with loot. Much killing ensues. Jack Palance also pops up in this one, playing an outlaw with a wooden hand, a bad attitude – and an old score to settle with Peterson. (1970)