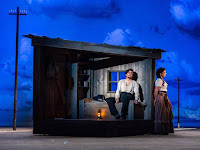 Over in the Wild Wild West...

French/Mexican tenor and stage director, Rolando Villazón is staging a gem of the bel canto repertoire as a Spaghetti Western at the Opera Leipzig.

"I want to bring the idea of the make-believe world," says Villazón.

"We relate enormously to the world of Western there's so many westerns and who has not played like you are a cowboy and you are an apache and then comes the sheriff and this is really a world that that fills us with a lot of fantasies and imagination."

"You have never seen such an approach for L'Elisir. There is so much happening on stage. It's like a good movie," says tenor Piotr Buszewski.

At the heart of the action is Nemorino, burning with love for the beautiful Adina, he thinks a potion he's bought from a charlatan has taken effect.

"He (Rolando) used a lot of elements of clownery..." explains soprano Bianca Tognocchi.

"...and also Commedia dell'arte, some really old, old things of my culture and I also see a lot of puppet theatre."

"Adina is a very strong independent woman and I think she's a real feminist."
"In this production, Adina is the star of the movie 'The Wild Wild girl' is there is the name of the movie. Nemorino is a really good friend of the diva and he works as an extra, " says Rolando Villazón.

"The problem is he really doesn't understand what is real and what is not."

"So the whole thing starts with her in a terrible scene where she's crying and he comes: 'Oh no don't cry, don't cry here you need a handkerchief please don't cry..."

Then the 'director' intervenes: "CUT"

"Una furtiva lagrima... it's a very welcoming, calm moment. When we hear the music for the first time... it gives us a sense of sadness or at least melancholy in some way, but the words or the feeling of Nemorino are very positive."

"As a stage director, you give something. It's a wonderful thing to be able to create beautiful gifts that you think are worth having and giving to the audience, to the artists and to the theatres and everybody involved."

Adina doesn't say anything, but she is also in love.
Posted by Tom B. at 6:56 AM