A secondary railway line that connected the La Calahorra station to the Alquife mines at the foot of the northern side of the Sierra Nevada and pat the village of La Calahorra, through a wide valley known as Llanos del Marquesado del Cenete. It was situated between the Sierra Nevada (to the south) and the Sierra de Gor-Baza (to the north), this valley, which at the time of Arab domination was fertile agricultural land, was assigned to the Cardinal de Mendoza, the King's first counselor, after the Reconquista. Catholics during the war against the emirs of Granada. His illegitimate son Rodrigo de Mendoza, who became the first Marquis of Cenete, built the imposing castle that dominated the town of La Calahorra between 1509 and 1512, characterized by walls and corner towers crowned by domes surrounding an elegant Renaissance courtyard in the Italian style which had a staircase in a Carrara marmot. The beds of the La Calahorra-Minas de Alquife railway line were removed in the autumn of 2001, but the layout of this short railway is preserved, which is situated in a splendid panoramic position, it was used in many films, some of which they also built sets for railway stations. Among the western films in which this railway appears: "For a Few Dollars More" (1965) (in the first sequence, in which Mortimer / Lee Van Cleef forces the train to stop at the Tucumcari station); "The Good, the Bad and the Ugly" (1966) (the train on which Tuco / Eli Wallach, a chained prisoner, manages to get rid of the corporal Wallace / Mario Brega); "Up the MacGregors) (1966); "Once Upon a Time in the West" (1968) (the set of the Cattle Corner station in the first train sequence); "Death Rides a Horse" (1967); "Face to Face" (1967) (a train robbery sequence); "Any Gun Can Play" (1967); "And for a Roof a Sky Full of Stars" (1968); “100 Rifles” (1969) (the sequence in which Raquel Welch, showers at an elevated cistern, and manages to stop the train loaded with government military, which is then attacked by the Yaqui rebels); "The Price of Power" (1969); “The Hunting Party” (1971); "Blindman" (1971); "Duck You Sucker" (1971) (the great night battle of the last part of the film, for which local mines are also used, namely The Low Irrigators, behind which the revolutionaries are lurking to confront the government troops of the military convoy by Gunther Reza); "Red Sun" (1971); “Pancho Villa” (1972),“ The Ballad of Ben and Charlie ”(1972); "The Man Called Noon" (1973) (in which the iron bridge also appears); "Another Try Eh Providence" ”(1973); "My Name is Nobody" (1973); "The White, the Yellow, the Black" (1974); "The Stranger and the Gunfighter" (1974); "Whiskey and Fantasy" (1974); "The Genius" (1975); "Buddy Goes West" (1981); "Rustlers' Rhapsody " (1985); "Winnetou Returns" TV (1997). In several scenes shot on this short railway line you see the snow-covered profile of the Sierra Nevada, the mountain range that includes the highest peak in Spain, Mulhacen (3,482 meters), and extends for about eighty kilometers from west to east, from the province of Granada to that of Almeria. 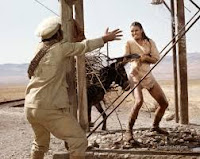