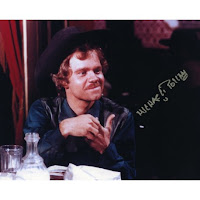 RIP Michael J. Pollard. Veteran actor Michael J. Pollard died in a Los Angeles, California hospital on November 20, 2019. He was 80. Born Michael John Pollack, Jr. on May 30, 1939 in Passaic, New York. Pollard had been acting since 1958. A character actor, he accumulated almost a hundred appearances in movies and television series since then. An early career break occurred when Pollard was brought in as a replacement during the first season of TV's "Dobie Gillis." Co-star Bob Denver, who was stealing the show as Dobie's beatnik buddy Maynard G. Krebs. He was going to be drafted into the Army and had to exit the series. When Denver was classified "4-F" due to a longstanding neck injury and returned, Pollard's character of weird cousin Jerome Krebs was quickly written out. Pollard played the role of "Hugo" in the original Broadway production of "Bye Bye Birdie" (costarring with Dick Van Dyke, Chita Rivera, Paul Lynde, and Dick Gautier) in the early 1960s. In 1967, Pollard earned an Academy Award nomination as Best Actor in a Supporting Role for his role of C.W. Moss in the film “Bonnie and Clyde”. He also earned two Golden Globe nominations for that role, one for Best Supporting Actor and one for Most Promising Newcomer. In addition, his performance in Bonnie and Clyde won Pollard a BAFTA Award as Most Promising Newcomer to Leading Film Roles. Michael appeared in two Euro-westerns: “The Legend of Frenchie King” (1971) as Marshal Jeffords and “Four of the Apocalypse” (1974) as Clem.
Posted by Tom B. at 11:36 PM