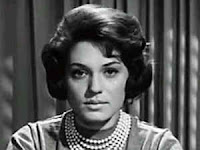 Renate Kuster was born in Gdańsk, Poland on September 12, 1936, she is a cabaret artist actress and film dubber. In the years 1956 to 1958 Renate Küster was a student at the Max Reinhardt School for Acting in Berlin. At Tatjana Gsovsky she took ballet lessons. For a short time she worked as a TV announcer . She starred as a young actress in the films “Night Nurse Ingeborg” and “Father, Mother and Nine Children” (1958).
From 1960 she played theater, including at the GRIPS theater and for television. Special roles were “Die Ilse ist weg“,“Die große Flatter” and “Sechs Wochen im Leben der Brüder G.”
As a voice actress Küster lent many other actors such as film stars like Jane Fonda, Faye Dunaway, Alida Valli, Catherine Deneuve, Raquel Welch, Stéphane Audran, Claudette Colbert the voice. In the German-language film “Die Nibelungen”, she referred to Karin Dor, as she was twice prevented from filming the James Bond movies . Also made Küster some audiobooks.
Küster was married since 1992 until his death in 2013 with the cabaret artist Dieter Hildebrandt [1927-2013], with whom she had also performed together, for example, in the Munich Laughter and shooting society.
Posted by Tom B. at 6:47 AM