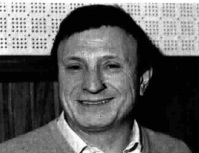 Sergio Tedesco was born in La Spezia, Italy on April 23, 1928. His father died when he was nine years old and he moved to Rome with his mother to help get a head start on his career. He eventually made his film debut in the 1941 film “Il bazar delle idee” directed by Marcello Albani. He then acted in two other films that same year.

As the years passed, Tedesco showed a natural talent for singing. He performed as a tenor at the Rome Opera House a few times and acted and sung in several plays while collaborating with Mario Zafred, Tito Gobbi, Renato Capecchi and Carlo Maria Giulini. Tedesco also performed at the Carignano Theatre in Turin and La Fenice in Venice. In 1998, Tedesco officially retired from opera singing.

Tedesco turned his attention and career to becoming a voice dubber. He voiced Kaa in the Italian version of “The Jungle Book” and reprised the role in the 2003 sequel. Sergio also dubbed Avery Bullock in the Italian dub of “American Dad” and Sam the Eagle and Statler in ‘The Muppets’ from 1979 to 1999.

Tedesco had two children. His daughter Paola Tedesco is an actress and his son Maurizio Tedesco is a film producer.