Guadix – Barrio de las Cuevass is an area of cave houses built by gypsies in the arid limestone hills shaped by the erosion that surrounds the city of Guadix, whose calee-shaped facades and showy white chimney pots create a lively contrast with the ocher color of the hills. This characteristic Andalusian landscape was used for various exotic environments, for example to represent the mountain village of Albania in the film the “il bandito dell’Epiro” (Action of the Tiger, 1957) by Terence Young starring Van Johnson, Martine Carol and Herbert Lom. It was used as a Mexican village in two Franco Giraldi westerns: “7 Guns for the MacGregors” (1965) (as the haunt of the bandit Santillana / Leo Anchoriz) and “Up the MacGregors” (1966) (again as the haunt of the bandit Maldonado / Leo Anchoriz). It is located in the arid and picturesque heights that surround Guadix, which in reality are of modest size and unfold in a fairly small area, are also used to represent the desert-like environments in the Southwest of America in “Navajo Joe” (1966) in the Indian graveyard scenes and “The Wild and the Dirty” (1968). 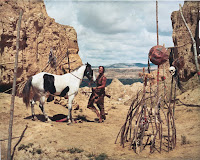