Woody from 'Toy Story' is named after him. A North Dakota woman wants to share his story 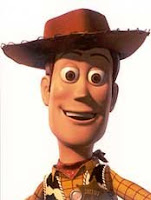 But Tom Hanks voiced a character inspired by a different cowboy: actor and athlete Woody Strode, who broke many barriers in his five-decade career.

"I don't think they could've picked a better person to do the voice of Woody,” said Pam Larson Strode, Strode’s daughter-in-law. "Even though they don't look alike, their personalities are so similar, and I think Tom Hanks captured Woody Strode in this character."

Larson Strode, of Grand Forks, was married to Woody Strode's son for 15 years. Woody Strode Jr. died five years ago, and now she hopes to tell his father's story.

Larson Strode has plenty of memories and a collection of movies and memorabilia belonging to the actor, including a hat similar to the one worn by his namesake character.

"This one is the one that most resembles the character Woody Pride in 'Toy Story.' So, I've kept that all these years and I keep it on display," she said while going through her collection.

Woody Strode is known for making history in Hollywood. He was one of the first black men to be cast as a hero in a Western.

"Woody was the second African American to be the lead in his own film, 'Sergeant Rutledge,' which deals with race — a man wrongly accused of sexually attacking a white woman," Larson Strode said.

In the mid-20th Century, it was difficult for African Americans to get a serious role in films.

"They would play lesser parts. Slaves, Native Americans or (in) humorous kinds of series," she said. "But Woody was different and (director) John Ford recognized that."

Woody Strode spent decades in Hollywood working with larger-than-life names, including John Wayne, Elvis Presley and Kirk Douglas. He was in 87 movies over the length of his career, though Strode is best known for starring in spaghetti Westerns.

"What he is most known for is his ability to work in a predominantly white world at a time when men of color did not get the roles," Strode Larson said.

Strode Larson's hope is that someone will make a movie about Woody Strode's life, which goes beyond film. In 1946, he helped to integrate the National Football League one year before his good friend, Jackie Robinson, debuted for the Brooklyn Dodgers. He also had a stint in professional wrestling.

In the early 1990s, Pixar approached Strode's family. Strode Larson said the studio told the actor that they planned to name a character after him in an upcoming film.

But Woody Strode died of cancer in 1994. Eleven months later, "Toy Story" was released in theaters.