For a Fistful of pesetas 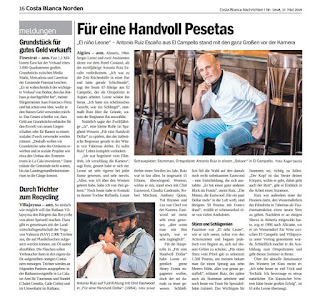 Almeria 1964, Sergio Leone and two assistants sit in front of the Hotel Costasol, as the twelve-year-old Antonio Ruiz Escano strolled by. "At the time, I was a helper in a bar and was just finishing work," says the now 67-year-old from El Campello, who works as a local policeman in Aigues. Leone waved to him to come here: I had a mischievous face, that of a rascal, “That’s basically why the director chose him. 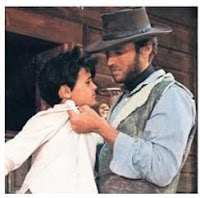 Of course, the twelve-year-old played only a small role in the spaghetti western "For a Few Dollars More", which was filmed in the desert of Tabernas. It would completely change Ruiz's life.

"I loved the shooting movies, I devoured the cameras," Ruiz says, he never got embarrassed, Leone had been very rigorous in every scene, and very nervous. "Everything I've learned about the Western, I've learned from him" Even today, he has contact with Leone’s daughter Raffaelle Leone who made a film this year, where Ruiz is in almost all of it. In all he appeared in 15 films, mostly Westerns where he’s worked with such actors as Clint Eastwood, Claudia Cardinale, Robert Mitchum, Anthony Quinn, Yul Brynner and Lee Van Cleef in front of the camera. Eastwood was usually very serious, "but if you talked to him, he was very accessible."

For “A Fistful of Dollars" and "For a Few Dollars More" Leone had actually wanted to hire Henry Fonda, but he was at that time too expensive Finally, the choice fell on the then a still relatively unknown Eastwood - the choice paid off. "He had a very different view than Fonda," says Ruiz. "The coins that Eastwood throw up in the air in, 'For a Few Dollars More", are, moreover, 50 pesetas with Franco’s face on it, "he says, chanting one of the many anecdotes.”

In addition, Ruiz was one of the pioneers in giving a new meaning to the western village of the Dilmdrehs in Tabernas as a tourist attraction. After working on several shows in Almeria, he moved to Alicante in 1986, where he worked in the Far West Village between El Campello and Villajoyosa. Finally, he trained as a local police officer and retired this past summer.

On the current Renaissance of the Western in the cinema, he says: "I see too many tricks and technology today. I prefer something more natural. A classic Western could have great success today,” El Nino de Leone is convinced. 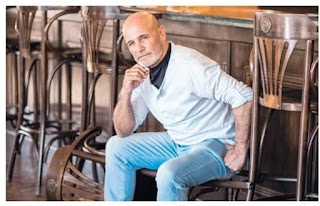